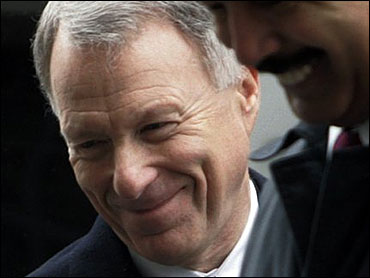 
There is no use arguing about President George W. Bush's power to pardon or commute the 30-month prison sentence of I. Lewis "Scooter" Libby, the former White House official convicted earlier this year of perjury and obstruction of justice. A president's authority here is absolute and acts like a trump card to neutralize the judicial and legislative branches. You can say it is not right. Or unfair. Or unjust. But you can't say that it isn't in the Constitution or within the president's purview.

Nor is it particularly useful to debate the impact of the political fallout from the president's dramatic decision. It is what it is and the president clearly understood that he would satisfy his conservative base and disappoint just about everyone else in the country by cutting a deal for his old friend and "loyal Bushie" even before the appeals process had fully played itself out. The simple truth is this: President Bush doesn't necessarily care what the fallout is because he doesn't have to; enough people detest his presidency anyway and he will not be standing for election anytime soon.

But it is worthwhile to consider the damage that the timing and symbolism of the president's decision has and will have on the executive branch's continuing ability to enforce the law between now and the end of the Bush presidency, still a full 18 months away. By commuting Libby's sentence now, by coming down so publicly and resolutely against what the president called an "excessive" sentence," the White House has made it more difficult for federal prosecutors around the country to push for tough sentences in these sorts of cases – or even to push for indictments or convictions at all. It's a lame-duck maneuver that comes far too far from the end of the second term; a hail-Mary pass at the beginning, not the end of the fourth quarter.

This is especially true because of the crimes of which Libby was convicted. Because they focus upon the truth of the information that wends its way into cases, and because they demand a level of honesty from all participants under the law, both perjury and obstruction of justice matters go to the very heart of the justice system. That is why prosecutors like to bring high-profile obstruction and perjury cases—see, e.g., United States v. Martha Stewart. When they do, they are able to send with great economy a loud and clear message to the thousands of other people in the country who are called upon every day to testify truthfully before a grand jury, or when called upon to do so by federal investigators or at trial.

That message is: When the law comes calling, behave, tell the truth, play it straight, don't obfuscate and don't play games; because if you do, you can get in big trouble – prison trouble. But the message President Bush delivered Monday when he spared Libby from prison is precisely the opposite. Libby's commutation says this: If you commit perjury and obstruction of justice and you receive a throaty prison term you deserve a break because your punishment is excessive. If you are a "good" person and have done "good" things for this country and you are a Washington insider, then the White House will get your back even though those good things didn't convince an expert – the trial judge – to cut you a break.

So at a time when men and women are languishing in prison for relatively minor crimes – life sentences, in some cases, thanks to those overwrought "three strikes" rules – President Bush just told the nation that a single day in prison is too harsh for a guy who repeatedly lied under oath and then failed to show any remorse about it. This from a man who as governor of Texas routinely and with savage consistently denied clemency requests from death row inmates whose capital trials were travesties upon justice. And, to boot, the president thumbed his nose at the jury and its verdict by declaring that Libby's fine and probation were sufficient punishment for his crimes. After what they said about him following his trial, it's even money or less that Libby's jurors would have sentenced him to prison time had they been given the chance. Anyone out there want to prove me wrong? The president never even talked with Libby's prosecutor about the commutation, much less any of the jurors whose months of hard work and dedication now gets an asterisk placed by it.

Moreover, the Libby commutation is bad symbolism for the White House because it plays precisely into the hands of an ever-increasing band of critics who say that this administration has consistently and with risible defiance operated under two different rules of law: one for itself and one for the rest of us. The commutation came, remember, one week after the White House declared it would invoke "executive privilege" to try to block a Congressional investigation and just a few weeks after the vice president's office defended itself from a national security review by declaring it was not part of the executive branch. It came from a White House that has defended an indefensibly lame attorney general and a chaotic Justice Department. It came from an administration that changed our rules about torture and engaged in warrantless domestic surveillance.

Experts can and do argue over the legal justifications for all of those executive branch policies and practices. But the common theme is indisputable. This White House does what it wants to do, offers some sort of legal defense or argument after doing it, and then dares leaders in the other branches, or anyone else, to stop it. This time, with Libby, there is no stopping the president. Once again, he has done something because he could have and not manifestly because he should have. It's another humbling legacy for this White House; one that will last as long as people remember what Libby did, why he did it and how and for what reasons he was able to walk away from it all thanks to his loyal and stubborn buddy in power.