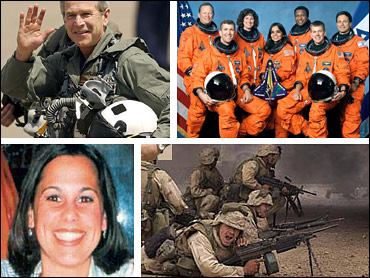 Years ago, an editor at a Florida newspaper gathered his staff to tell us he wanted stories that would make a reader pause over breakfast and say "My God, Martha, did you see this?"

I like those stories, too. As an assignments editor at CBSNews.com, it's my job to find those stories and get them on the Web. It's a fun job; and the action never stops on a 24-hour news Web site.

A "Wow!" story is different from an "Important-But-Dull" or an "Isn't-That-Interesting?" story. When you read a "Wow!" story, it either shocks, amazes or makes you mad -- but you're engaged. Sure sign of a "Wow!" story: You want to tell somebody what you've just seen or read. And you want to know more.

Since this is my list, I'm throwing out all the stories involving celebrities. Not that I begrudge them, because those stories generated a ton of Web hits for CBSNews.com. But they're just too easy. And they're not really "Wow!" stories -- more like guilty pleasures.

So honorable mentions, but no Top 10, for Michael, Kobe, Tiger-Roy, Arnold and -- this hurts me, too! -- Ben and Jennifer.

10. Shuttle
I learned of the first shuttle explosion in 1986 while driving to my job at a newspaper in El Paso, Texas. It was late morning, and there was a dog running around on the entrance ramp to the freeway. I was wondering if I should stop and try to get him in my car. Then I heard the news on the radio, and, as we say in Texas, I put the pedal to the metal.

Feb. 1, 2003 was a Saturday morning. I was sleeping late in my tiny apartment in Manhattan. The phone rang, and my brother told me to turn on the television. I stood there, watching the TV and talking to my brother.

Where were you when you heard the news? Who did you call?

9. Hiker Amputates Arm
Mountain climber cuts arm off with pocket knife after being pinned by boulder for five days. A classic "water cooler" story. Could you do the same? Discuss amongst yourselves.

8. Hillary
Love her, hate her -- people just can't get enough about her. A boffo book tour and an omnipresent shadow over the Democratic presidential race. She wins every poll as the strongest Democrat to challenge President Bush in 2004, but isn't running. Or is she waiting for the last-minute call? Even at her phoniest -- all those interviews saying she believed Bill right up until he confessed -- Hillary is … interesting. Put the word Hillary in a headline, it sells. I think people are intrigued by the glimpses of the Hillary behind the mask.

7. France
French-bashing rose to fever pitch in the run up to the war. Remember "freedom fries?" Remember the legislator who wanted to dig up U.S. WWII casualties from French cemeteries and bring them home? What I call a "hot-button" story -- a sure bet to get readers riled up, or feed the flames already there.

6. Bush
See Number 8 above. Are there any other public figures who have polarized public opinion as much as Dubya and Hillary? From the "Top Gun" landing on the aircraft carrier to the Thanksgiving secret mission to Iraq, President Bush has thumbed his nose at the critics and, seemingly, had fun in the job. Everyone sing along now: "I did it Myyyyyy Waaaaaaaay!"

5. Jessica
Let's skip the whole debate about whether the White House tried to turn Pfc. Jessica Lynch into Rambo, or over-hyped her rescue. When I think of Jessica Lynch, I remember the first time I heard her speak, shortly after she returned to the U.S. on crutches -- pure West Virginia twang. In that speech, Jessica said how much she missed her friend from the 507th Maintenance Company, Lori Piestewa, the first U.S. woman killed in combat in Iraq. And I remember Piestewa's grieving mother telling reporters she was happy for the Lynch family when Lori's friend Jessica turned up alive.

Two women -- a twangy 19-year-old blonde and a young Native American mother -- fighting, dying, alongside the men in some of the worst war-time conditions. It says a lot about where our society is in the year 2003.

4. Laci
The FBI says there were more than 16,000 murders in the United States in 2002. One of them happened around Christmas Eve last year, involving a pretty California woman who was eight months pregnant at the time. It's been America's number one crime story ever since.

Scott Peterson is the man America loves to hate. Even if he didn't kill Laci, he's still a skunk for fooling around with that massage therapist when his beautiful wife was about to give him a son. And what was he doing hovering around the Mexican border with dyed blond hair and $10,000 in cash on the day cops finally reeled him in? If he's guilty, how does this whole mess happen? Two attractive people, blessed with loving family, a home, a baby on the way. Who let the snake into the garden?

3. The War
There was the buildup to the war, the faltering search for WMD, the European backlash -- see Number 7, France. Then came shock and awe and the hunt for Saddam. The occupation deteriorated into guerrilla warfare. I think we all winced at the daily headlines -- 1 or more U.S. GIs killed in Iraq.

The story ends on a high note in 2003 with the capture of Saddam, and the hope that the resistance there will become less viable.

2. Windshield
Chante Mallard of Texas got a 50-year prison sentence in June for leaving a man to die a slow death while lodged in the broken windshield of her car. More specifically, she hit him, drove home, parked inside her garage and left him there, coming back into the garage once or twice to apologize.

This, to me, was the story that made me choke on my toast and exclaim, "My God, Martha!" It speaks volumes about a society where people don't take responsibility for their actions.

1. Elizabeth
Elizabeth Smart was found alive! It was such a miracle, such an unexpected blessing, a shaft of light in the grimmest, darkest story imaginable. You just wanted to say it, sing it: "She's alive! Oh my God, I don't believe it! She's alive!"

During the Elizabeth search, I interviewed a missing children's expert who told me that in cases where a child is taken by a complete stranger, 75 percent of the time the child is dead within three hours. Multiply that by the nine months she was missing. Throw in that poor shady handyman who died under a cloud of undeserved accusations. Was there anyone, anywhere, who believed that little Utah girl was anything other than a battered corpse moldering in some wretched corner?

But Elizabeth is alive.

And miracles do happen. And with that said, best wishes to one and all in
2004.