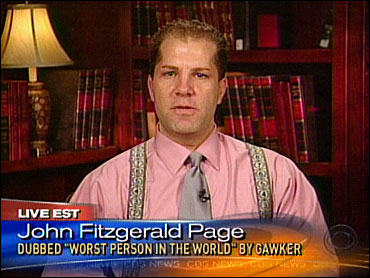 Imagine if you finally got your 15 minutes of fame - but you became famous for a snotty e-mail you shot off to some woman on an online dating site that she sent to her friends and which ended up on the widely-read blog Gawker.com, which then dubbed you: "The Worst Person In The World." As in, even worse than Osama.

Welcome to the downside of Internet fame. And that's about as low as you can go.

And meet John Fitzgerald Page, the author of the scurrilous e-mail. He looks and sounds like a regular guy, albeit one with a firmly established sense of self-esteem. When he met a woman on Match.com, he chattily wrote to her:

"I live in a 31-story high-rise condominium, right in the middle of the Buckhead (Atlanta) nightlife district. Do you ever come to this area of town to shop/go out/visit/explore?

"What activities do you currently participate in to stay in shape? I work out four times a week at LA Fitness. Do you exercise regularly? I am 6 feet tall, 185 pounds -- what about yourself? I am truly sorry if that sounds rude, impolite or even downright crass, but I have been deceived before by inaccurate representations so I prefer someone be upfront and honest on initial contact...

"I do mergers & acquisitions (corporate finance) for Limited Brands (Bath & Body Works, Victoria's Secret, etc). Enjoy any of our stores/divisions?

The woman, known only as Jen, decided against meeting Page and Match.com sent out a polite, computer-generated letter letting him know she didn't think they'd be compatible; he then dashed off this ill-advised retort:

"I think you forgot how this works. You hit on me, and therefore have to impress ME and pass MY criteria and standards -- not vice versa. Six pictures of just your head and your inability to answer a simple question lets me know one thing. You are not in shape. I am a trainer on the side, in fact, I am heading to the gym in 26 minutes!

"So next time you meet a guy of my caliber, instead of trying to turn it around, just get to the gym! I will even give you one free training session, so you don't blow it with the next 8.9 on Hot or Not, Ivy League grad, Mensa member, can bench/squat/leg press over 1200 lbs., has had lunch with the secretary of defense, has an MBA from the top school in the country, lives in a Buckhead high rise, drives a Beemer convertible, has been in 14 major motion pictures, was in Jezebel's Best dressed, etc. Oh, that is right, there aren't any more of those!"

Oh, snaps, potentially fat girl! Take that! The blogosphere roared and Page went down in history as the man who makes Osama seem cordial by comparison.

Page is now trying to do some spin control and turn his shame into fame. As part of his "I'm really not so bad" campaign he spoke with Julie Chen on The Early Show.

Asked if, with hindsight, he regretted sending the e-mail, Page said, "We're talking about a personal e-mail I sent on a paid service that was masked with a masked e-mail address, so we're going to talk about my personal business today. So, no, I don't have any regrets. I should be allowed to correspond with people without regrets."

When he sent the e-mail, Page said, "I was a little frustrated because I was pretty much giving her a chance to impress me since she hit on me first and met my standards, and to say we weren't a personality match based on the fact she'd never met me or talked to me I thought was harsh. So, I just wanted her to know next time she met someone of my caliber, she might want to step back. If you hit on someone and find them attractive, then find they have a good job, live in a nice area and take care of themselves, that's not the time you reject somebody, I would think."

The fallout has been relentless, said Page. "People are calling me, e-mailing me, threatening me constantly. People that want to fight me. People that have known me now... are taking me off their 'friends' page. So, the backlash has been incredible. I'm just here to say that nothing's really going to get me down. I know who I am, and I'm going to keep living my life and enjoy myself."

"What is your strategy now other than that?" asked Chen. "You'll probably get more threats. You're talking to us on national television."

"I live in a secure building. Also, I mean, when you think about it, if you're going to threaten me over a personal, private e-mail to someone that I wasn't threatening, I think the problem is on your end," said Page.