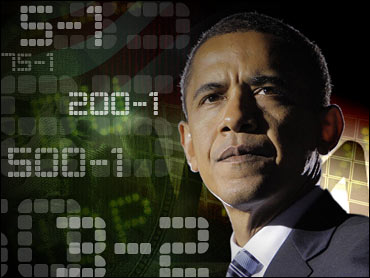 Barack Obama's parallels to Abraham Lincoln are well chronicled. They hail from the same state. Obama frequently invokes Lincoln's words. And the president-elect will be sworn in on the same bible used by Lincoln at his 1861 inauguration.

So it's a safe bet that Lincoln will be the first former president mentioned by Obama during his inaugural speech, right?

As it turns out, it is a safe bet - but not a profitable one.

In fact, the odds of Lincoln getting the first presidential shout-out are 10-11, according to BetUS Sportsbook. Want a better payout? Then put your money on FDR (3-2 odds) or George Washington (3-1).

Betting on American presidential politics - and Obama in particular - has spurred an avalanche of online wagers. Since such gambling is illegal in the U.S., offshore operations handle all the political parlays. Paddy Power, Ireland's biggest bookmaker, said that bettors gambled $3.4 million during the '08 presidential election. In the U.K., the tally was $8 million, according to MarketWatch.

While all major international political events draw betting interest, "the U.S. presidential election was by far the biggest in terms of money wagered," said Ken Robertson of Paddy Power.

Now that Obama's been elected, bookmakers have posted odds on a gamut of inauguration scenarios.

Consider this wager: How many times will Obama reference God during his inaugural address? (For the record, George Bush mentioned God three times in his last inauguration address; Bill Clinton invoked God once.)

Will precipitation dampen the inauguration? Odds of snow are listed at 5-4.

Soon you will also be able to wager on the color of Obama's inauguration tie, how many sips of water he takes, and how many times he mentions the word "change," said Robertson.

"We have a bunch of very creative people working with us who specialize in coming up with quirky bets," he said.

But the gambling menu doesn't end on January 20.

For example, you can bet on what the Obamas will name their puppy. (George leads the pack with 8-1 odds, while Joe the Plumber is 250-1). Who will play Obama in the film version of his life? (Will Smith is the current favorite while Dave Chappelle is a 33-1 long shot).

Not all the propositions are light-hearted, such as wagers on what will happen first under an Obama White House. Nabbing Osama bin Laden will land you 6-1 odds, whereas a ban on privately owned guns is 100-1.

Inevitably, some bets have veered controversial. Just after Obama won the election, Paddy Power posted 12-1 odds that the president-elect would "not finish his first term." Many saw the wager as a thinly veiled bet on whether he would be assassinated. After a flood of complaints, the bet was later clarified - that Obama would not finish his term due to impeachment or resignation.

"Even for us, betting on someone to be assassinated is way too much, in very bad taste and definitely not our style," Robertson said.

Odds on Obama have fluctuated over time. This time last year, you could have backed him at 2-1 to reach the White House (Hillary Clinton was the favorite back then, according to Paddy Power). But the return on investments shifted as dramatically as the poll numbers. By Election Day, Obama's odds of being the next U.S. president had skyrocketed to 1-50 - meaning a $50 bet would win you just a dollar. (By contrast, British gambling firm Ladbrokes posted McCain as a 13-2 underdog on Nov. 4.)

Gambling enthusiasts aren't the only ones betting on the president-elect; so is the U.S. online gambling industry. A 2006 law made online gambling illegal in the States, but some believe that Obama, a poker enthusiast himself, would be more gaming-friendly. In fact, you can get reasonably optimistic 6-1 odds that online gambling being legalized under Obama.

Rep. Barney Frank, who is pushing an amended online gambling resolution through Congress, thinks Obama will help unshackle the industry. He predicts the president-elect and a Democratic Congress will ease the Treasury's regulations on gambling-related transactions.

"With the Obama administration, you wouldn't see these bad regulations," Frank told Gambling 911 in November. "Clearly we have more support opposing (these attempts to stop regulation) with more Democrats in Congress. I wish it weren't an issue but the Republicans have made it one."

So are all Republicans pro-regulation when it comes to online gambling? Will the GOP be betting on Obama?

No one knows the numbers on partisanship in political wagering. But it is interesting to note where some in the GOP are flocking for Obama's inauguration: Las Vegas.