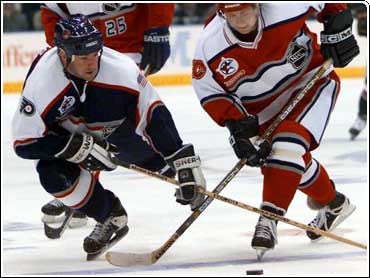 A frozen pond. A pair of brothers. A shared vision.

As Pavel Bure shivered alongside Wayne Gretzky, Mario Lemieux and Gordie Howe, filming the memorable scene that opened the NHL All-Star game telecast, he recalled another frozen pond. And a moment frozen in time.

Bure scored three goals, two assisted by little brother Valeri as they recreated their days on a frigid, deserted Russian lake, to lead the World's 9-4 rout of North America in the 50th All-Star game Sunday.

Three goals, two brothers, one special moment in a game that, for a change, was something more than an unexciting shootout.

"That's why I got MVP, he set me up a lot," Pavel Bure said, nudging a brother who has been his teammate only several times since their days together with the Red Army team.

During their youth, the Bures sometimes skipped school to play on a frozen lake, much like the one depicted in the ABC film clip that drew a huge ovation inside a jam-packed Air Canada Centre.

In the short film, Gretzky, Lemieux and Howe trek to a remote pond for some pickup hockey, only to discover Bure, Jaromir Jagr, Paul Kariya and Eric Lindros already playing. The retired stars cede the pond to the new generation, who respond by tapping their sticks in the traditional hockey player's show of respect.

"It wasn't just a commercial, it was something bigger. It's like history, it's like changing generations. It meant a lot to me," said Pavel Bure, the Russian Rocket who leads the NHL with 36 goals for Florida.

Like always, Pavel was the scorer and Valeri was the playmaker as they combined for six point, one more than brothers Maurice and Henri Richard had in 1958. The Bures are the 12th set of brothers to play in the game.

Their mother, Tatiana, proudly watched on, as did Valeri's wife, former TV sitcom star Candace Cameron, who is expecting a child any day now.

"I'm his biggest fan," said Valeri Bure, who often talked with Pavel of playing together in the NHL. "It's easy to play with him, 99 percent of time give him the puck he scores a goal."

The Bure brothers nearly connected for another goal in a four-goal World third period, but Valeri disobeyed big brother's instructions by passing up an open shot to try to feed Pavel again.

"Younger brother never listens to (the) older one," said Valeri, who plays for Calgary and insists he would take less pay to play alongside Pavel in Florida. "I thought it would be even better if he got a fourth goal."

Bure's hat trick was the 11th in All-Star history and the fourth in four years in a game that has increasingly emphasized offense, with an average of 16 goals over the last 10 years.

That's what made World goaltender Olaf Kolzig's shutout third period so unusual. He faced eight shots and stopped them all as the World kept building on the 5-4 lead it held entering the period.

"We got some great goaltending," said Detroit's Scotty Bowman, who coached in an All-Star game for an unprecedented fifth decade. "He (Kolzig) made some tough saves and really distinguished himself out there."

Pavol Demitra of St. Louis scored his second goal and Miroslav Satan of Buffalo and Radek Bonk of Ottawa also scored in the four-goal period against Mike Richter, the only goaltender not to allow a goal in Saturday night's skills competition.

The five-goal decision followed close victories by North America, 8-6 in 1999 and 8-7 in 1988, in the first two All-Star games played under the present format.

In a game where defense is an afterthought and hitting is totally forgotten as players guard against injuries, hometown goaltender Curtis Joseph of the Maple Leafs made 20 saves for North America in a busy first period, yet still trailed 3-2.

With icings waved off and the play constantly flowing from end-to-end with no checking or face-offs to interfere, it took only 11 minutes to play the first nine minutes of clock time an unheard of pace for a regular-season game.

The first and only penalty wasn't assessed until 5:5 of the third period, when Colorado's Sandis Ozolinsh of the World team was called for hooking.

St. Louis goaltender Roman Turek, initially left off the World team despite owning better statistics than Tommy Salo of Edmonton or Kolzig of Washington, started for the injured Dominik Hasek of Buffalo and was outstanding despite yielding goals to Joe Sakic and Jeremy Roenick.

Turek stopped breakaways by Whitney and Owen Nolan, giving his World teammates time to open a 2-0 lead on goals by Demitra at 3:12 and NHL scoring leader Jaromir Jagr of Pittsburgh at 10:50. A total of nine players scored goals.

"A lot of action, a lot of shots," Turek said of the almost nonstop up-and-down flow. "I think it's more like European hockey."

And, right now, European hockey is king, as evidenced by the Czech Republic's gold in the 1998 Olympics, when Canada and the United States didn't medal. Many of those Czech players, including Turek and Jagr, were on the World team that Bowman said was "almost like a Czech all-star team."

Gretzky, who retired last year, was missing from the All-Star lineup for the first time in 19 years. But he drew an extended ovation when his No. 99 was officially retired by every NHL team during a pregame ceremony.

Unlike the other major all-star games, the NHL format sometimes puts regular-season teammates on opposing teams. That's how Toronto's Dimitri Yushkevich beat Joseph, his Toronto teammate, on the goal that put the World ahead 3-1 at 14:35.

"He's been setting me up in practice," Joseph said. "He hasn't scored on me all year."

Pavel Bure's first two goals, in a span of 8:05 at the start of the second period, came against Martin Brodeur of New Jersey and put the World ahead 5-2. But North America closed again to within one goal, at 5-4, as Tony Amonte of Chicago scored at 12:14 and Whitney at 17:08, with Salo in goal.

Ray Bourque, who tied Gretzky by playing in an 18th consecutive All-Star game, and Mark Messier each had an assist to remain tied for the All-Star record with 13 assists.

Besides the memorable opening clip, the ABC telecast featured in-game interviews with coaches and players, who answered questions submitted via the Internet.

The live microphones made for an uncomfortable afternoon for North America coach Pat Quinn, who said, "I was not allowed to speak to the officials in the language I am normally accustomed."