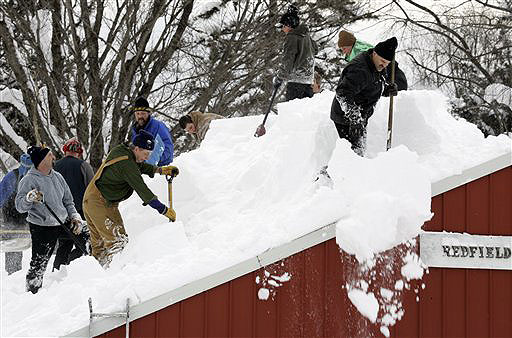 One plans to take off in a spiffy red truck. Another plans to enjoy a long-delayed honeymoon. One is going to play more sports and, of course, one is going to write a book.

President Clinton appointed a record number of women to his cabinet, all of whom have made a significant impact. They are Madeleine Albright, secretary of state; Janet Reno, attorney general; Donna Shalala, secretary of health and human services; and Alexis Herman, secretary of labor.

All of them spoke to CBS News Early Show Co-Anchor Jane Clayson about their years of service, and about what they plan to do next.

Albright says she has had "the world's best job," and being a woman sometimes gave her an edge.

Did she sometimes flirt her way through tough moments?

"Well," replies Albright, "we all use what we can to get what we need."

But she was never a shrinking violet. When she is in a group of men, she doesn't wait for one of them to give her an opening in the conversation; she interrupts and states her opinion strongly.

"I think if you're always thinking about interrupting, you listen differently. I call it active listening," she explains.

She has even interrupted the president, "although he's not interruptible really … because he is such a brilliant speaker … and, besides, he's president of the United States."

The Czechoslovakian daughter of a diplomat, Albright arrived in the United States when she was 11, her family having fled first the Nazis and then the Communists.

Mr. Clinton appointed Albright his secretary of state in 1996 to serve during his second term. It was then that a reporter, looking into her background, brought her some news: Her grandparents had been murdered during the Holocaust because they were Jewish.

"It's hard to describe this because, obviously, it was a huge shock," she recalls, "but I had been raised to already know how horrible the Holocaust was and the need for tolerance and the need to prevent evil."

She says her background led her to cherish and champion democracy, and she became the highest-ranking woman ever to serve in the executive branch. It came as a surprise to her that being a woman served as an advantage. "I can alternate between being tough and being humane."

She was tough during the bombing of Kosovo. But the policy of limited force she advocated was ultimately successful, and Albright cites freedom in the Balkans as one of her greatest achievements.

The leading woman on the incoming Bush administration's foreign policy team, national security advisor-designate Condoleezza Rice, has made it clear she thinks U.S. forces should be removed from the region. To that, Albright says, "None of us thought our forces should e there permanently. But I think they need to stay there as long as there is a job to be done."

Her designated successor, retired Gen. Colin Powell, will take office with a different perspective on the use of military force. Albright says she thinks Powell's greatest challenge will be "for him to realize that the government he was in eight years ago doesn't exist, and the situation doesn't exist anymore."

Her biggest disappointment, she says, is that "we were not definitively able to bring peace to the Middle East,"

"You can't have a cookie-cutter foreign policy. You have to find out what exactly is available in every country," says Albright. "In North Korea, we had a very large opening. … There's a real opportunity to end the last vestige of the Cold War in a very, very dangerous place."

The Bush administration will learn its own lessons. But, for Albright, the lessons learned simply solidified what she already knew: "This is the most incredible country that when it's involved, when we really care about other places and decide that humanitarian issues are part of the U.S. national interest, we can make a difference."

Albright plans to write a book about her life and how it reflected the 20th century.

Reno was the first woman attorney general of the United States. Many people who know her describe her as "private" and "tough."

Reno takes exception to "tough," explaining, "My grandmother would say, 'She's not tough. She's firm' … Tough has always connoted to me an insensitivity. Firmness is, to me, perhaps, a better word."

On the government raid that removed Elian Gonzalez from his Miami relatives and returned him to his father: "At about 4:30 in the morning, I wondered just how it would all work out."

Was she wondering whether she was doing the right thing?

Reno was immediately put to the test. The Branch Davidian siege was three weeks old when she took office. After 51 days, Reno made the decision to storm the complex. A total of 74 men, women, and children died in that tragic fire. Evidence suggests it was set by followers f David Koresh, the Davidians' leader.

Reno also was criticized during the Monica Lewinsky scandal and independent counsel Kenneth Starr's investigation. Among the complaints of her critics: She went easy on the Clinton administration on the Lewinsky affair and campaign finance issues.
"I don't think you can say that it was I that went easy on the Monica Lewinsky investigation when it was I that asked the court to expand Mr. Starr's jurisdiction," says Reno. "I did it based on the evidence and the law."

Did she feel betrayed by the president?

"That," she replies, "is between the president and myself."

In the midst of the high-profile issues that kept Reno in the national spotlight, behind the scenes she was coming to terms with her own personal challenges. She was diagnosed with Parkinson's five years ago.

"Some days, it shakes and, if it's at my press availability, you can see the reporters looking around, saying, 'She's shaking again.' And I'm thinking, 'Oh, if they could just get used to it, it wouldn't bother them anymore,'" she said.

Has the intensity of her job made her condition worse?

"I don't know," she says. "I'll let you know after I go home and sit on my front porch for a week without stress and strain and see if it makes any difference."

As her tenure comes to an end, Reno is reflective. She says that she hopes she holds intact the principles with which she came to Washington.

"But, she adds, "I think I have grown and aged and learned."

The attorney general has bought a red truck. On Jan. 20, she is driving out of Washington. First stop: Miami. And then, she says, when the spirit moves her, she's headed west.

Shalala, secretary of health and human services, says she will always miss "being right in the center of the action."

Shalala is the longest-serving secretary of health and human services in U.S. history. Ask her to name her greatest achievement, and she answers, "We anticipated the future. We invested in the country's greatest scientific institutions. We've expanded children's health insurance. We've expanded Head Start, childcar. We've implemented welfare reform."

But she expresses disappointment that "we didn't get health insurance at a minimum for all working, low-income families in this country. They deserve it."

Hillary Rodham Clinton originally took charge of that campaign. Would Shalala have done things differently than the first lady?

"The president had the right to appoint who he wanted to appoint," she says. "We bit off more than we could chew. It's clear there's a consensus in this country about the problem, but not about the solution."

Looking ahead, Shalala says the challenge of her successor (Wisconsin Gov. Tommy Thompson has been designated to next head HHS) will be the agenda set by Mr. Bush.

"And that," she explains, "is the fundamental reform of Medicare, which is not easy because the number of seniors is going to double in this country. And we need a health care system that's going to provide quality health care for all of them."

Shalala is looking forward to playing tennis and golf. "I'll have more time," she adds, "to do everything."

Herman, secretary of labor, says she is looking forward to "definite down time." But at the top of her agenda is to "take that honeymoon with my husband I never got to take."

Herman is the first African American to serve as labor secretary.

"For me to serve as the first African American in the labor department in a country that was built on slave labor and to work now with all the labor, that was humbling," she says.

During her service, unemployment reached a 30-year low. To what does she attribute that?

"Oh, I believe it's for a couple of reasons," she says. "First, I think we came in and made some really tough and hard decisions about what we had to do to get the economy moving in the right direction, to get it back on track again, but also to the hard work of the American people. This has really been the people's prosperity."

Herman's likely successor, Elaine Chao, may have a challenge ahead. The economy is showing signs of a downturn.

"We've gone from spectacular growth to … growth that is probably more sustainable, more steady, more stable," says Herman. "I believe it is an economy that we can keep in balance."
On her way out, when Herman looks over her shoulder, she sees the long road she has traveled. Her grandfather was a janitor. Could he have imagined thahe would have a granddaughter who was the Secretary of Labor of the United States of America?