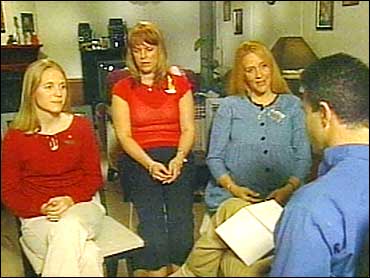 Nowhere has the bloodshed of the war been more obvious than at North Carolina's Camp Lejeune, home to the Marine units that have suffered many of the casualities in Iraq.

The Early Show correspondent Jon Frankel visited the camp to talk to some Marines, some town residents, and the loved ones of deployed troops. He arrived just before President George W. Bush, who made a speech there Thursday and met with the families of those killed in combat.

"Pretty much every Marine around town will tell you that I'd rather be over there in the sand box than turning wrenches on the shop floor," says Sgt. Anthony Collins.

If TV screens tell the story - so do long faces and empty bar stools.

"It's like a ghost town," says resident Myron McCutchen. "Everybody's feelings are up and down. Nobody is happy and everybody is focused on the war."

There are no tanks or bullet shells, but there are lots of yellow bows, flags and "God Bless Our Troups" signs all over Jacksonville, home to Camp Lejeune and its 47,000 active Marines and sailors.

"A lot of the wives are buying yellow ribbons. They put them in their front yard. It's a patriotic thing to do," Russell says.

Liz Brown, girlfriend of a deployed Marine, says she sees ribbons on her whole drive to work.

"Everybody wants to do something and for people who don't have loved ones in the military, that's something they can do," she says. "They can put a sign out, 'We support our troops.'"

Asked what the mood of the town is, Beaver says, "I would say they feel proud. Most importantly, the town has a lot of backup for our Marines."

But the women say the mood has changed with each step towards this conflict. From helping their men pack up, to watching them ship out, to seeing them engage the enemy.

Myers says, "It changes as the objectives changed and you actually know they were going."

Beavers says she appreciates President Bush's visit. "It means that he cares about us as the spouses. Not just the fact that our husbands are over there, giving everything they have including life."

The president is visiting the families of those killed in combat and addressing the troops.

"If him being here creates an atmosphere that makes us all a little more positive, if it makes one day go by that much easier, it will be well worth it," Brown says.

Now, the days are filled with anxiety and a sense of urgency without satisfaction.

"You want to catch the latest news and see what happened but then you don't get all the details for a few days and that's the hardest part," Brown says.

To think that the platoon their husbands' serve in lost somebody is scary, Myers says, "Knowing you might get a call..."

Beavers says, "You still find yourself sitting at the window or the door, 'Are they coming down my road next?'"

Facing this fear, these women know, is all part of loving a Marine.

"Our guys signed up for this; that's why they're in it," says Brown. "They're tough; they're willing and that's why we're so proud of them."