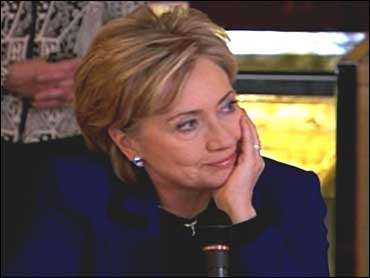 It's been a busy couple of days for Marianne Pernold Young, as far as presidential candidates go. She saw Barack Obama speak on Saturday.

Today was her turn to move a candidate to tears - when a question about how the candidate keeps it all together caused Hillary Clinton to show a side of her you never see.

"It shows she's a human being," Young said.

Undecided when she woke up, Young's now leaning strongly toward Clinton.

"She showed emotion," Young said. "She was there for me. She is there for all of us."

One of Clinton's rivals didn't see if that way at all - implying she was soft.

Others will question if it was for real. Not Young.

Axelrod said to her: "People all over this country are watching this moment, and a fair number of them will say she was doing it for the camera."

So after thousands of questions asked by the most aggressive reporters in the last 16 years, and never showing a hint of emotion, it's a 64-year-old freelance photographer who elicits such an emotional response from Hillary Clinton.