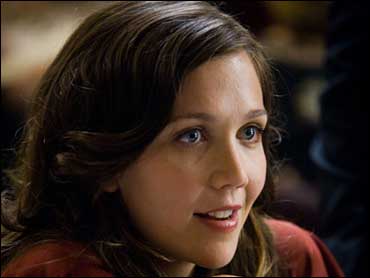 Prosecutor Rachel Dawes has some tough decisions to make in "The Dark Knight." She's the object of affection of two of Gotham's best known citizens: district attorney Harvey Dent and Batman himself, Bruce Wayne.

Maggie Gyllenhaal, who plays Rachel in the latest installment of the Batman franchise, has made her decision.

"I think it's important as an actor to always try to choose the most difficult thing," she told Early Show co-anchor Harry Smith. " So I really decided she loves them and desires them both equally."

Gyllenhaal wasn't really looking for work when she got the call to play the role originally created by Katie Holmes in 2005's "Batman Begins."

"I wasn't reading scripts at all. I had a three-month-old and I was really in the mama mode," Gyllenhaal said. "And, you know, at the same time I was a real fan of director Chris Nolan. The cast was set mostly and it was Gary Oldman, Michael Caine, Heath (Ledger), Christian Bale, Aaron Eckhart and Morgan Freeman. It was pretty hard not to take it seriously."

Gyllenhaal said that she and Nolan were in agreement about how Rachel should be portrayed.

"We wanted to make Rachel a real woman," she said. "We wanted to make her a smart, funny woman who cares just as much as all these guys care about making the world she lives in a better place. When I knew that he wanted to do that, too I thought, 'okay, I have to do it.'"

Ledger appeared opposite Gyllenhaal's brother Jake in "Brokeback Mountain," so she knew something about him before arriving on the set.

"I knew he was a fantastic actor," she said. "And so when we have one major scene together and when I went to shoot it I didn't plan anything because I knew what a good actor he was. And I knew that he would be free with me. I didn't know he would be as free as he was. He's really pretty extraordinary in the movie."

"I watched it again last night on the IMAX," said Gyllenhaal. "Pieces of the movie were shot on IMAX. I hadn't seen it on IMAX before, it was breathtaking. I couldn't believe it."