This column was written by Noam Scheiber.

"It's an exciting time to be alive," Bill Clinton exclaims. No seven words would sound more banal in the hands of a lesser politician. Clinton says them with the wonderment of a toddler who just learned to walk -- at least if that toddler could speak in complete paragraphs and had a sponge-like memory for detail. "When I ran for president the average cell phone weighed five pounds," he muses. "Go figure. You know how many sites there were on the Internet? The whole shebang? Fifty. We add 50 every five minutes now."

It's an early Saturday morning in West Des Moines, less than two weeks out from the caucuses, and Clinton has lured some 350 Iowans to a local high school. We've ostensibly come to hear the definitive case for Hillary -- and Bill clearly intends to make it. But, then, this crowd would have shown up to hear Clinton make the case for energy-efficient windows. (Which is fortunate, since he'll be doing that, too.)

This is a point that's generally lost in the coverage of Clinton. In the cost-benefit analysis that looms over any discussion of the former president these days, there is, on the one hand, the '90s -- that distant period of low unemployment, high-growth, and relative peace and security. This is the asset side of the ledger, the stuff that's supposed to help Hillary. On the liability side is the politician who defined the decade -- the serial triangulator and sometime adulterer. The more voters look past the '90s and focus on Clinton himself, the more problematic his presence is supposed to be.

What this analysis misses -- that strange, erratic "Charlie Rose" appearance notwithstanding -- is the sheer pleasure of seeing the big guy work. You'd be hard-pressed to recall a Democratic presidential field richer in talent than the current one. And yet, five minutes into any Clinton riff, you realize you're watching some freakish hybrid of the party's top-tier. There's the policy fluency to rival his wife's: "If you took any country's health care system, and dropped it in America -- Japan, Germany, you just go pick one -- it would cover everyone and cost you $700 billion less than we spend today," he says. There's enough soaring rhetoric to embarrass Barack Obama: "Every other area we're the 'can-do' country ... except in health care, where we say, 'I'm sorry, we're a 'can't-do' country.' ... It's pitiful. I'm tired of hearing it."

And, despite those eight years in the White House, the frequent jet-setting and the eye-popping speaking fees, Clinton still oozes enough ordinary-Joe to make John Edwards look like the leisure class. "How many times have you showed up in a new doctor's office and before you can get the first pill or the first examination, you have to sit there and answer five pages of questions about your medical history?" Clinton asks, evoking numerous head-nods. "I had to have a little dental procedure and ... I wanted to scream that I was president and governor, I had very good medical records. I am 60 years old. I do not remember the answer to half of these questions. You've all been there, haven't you?"

Clinton's speeches seems like rambling affairs as you listen to them -- the bullet points pile up so quickly it's hard to keep them straight. But they always leave you with something profound. If Obama at his best is a preacher, Edwards a trial lawyer, and Hillary a high-school valedictorian, then Bill is the great balladeer of American politics. Often the take-away is some variation on the following: There's a solution to pretty much any problem if you get deep enough into the details. In practice, this message can leave audiences slightly bewildered, as if they can't believe the answers are so easy, but can't find a flaw in Clinton's logic either. At one point a voter asks a question about Hillary's health-insurance tax credits: What if you make too little money to pay income taxes, but too much to qualify for Medicaid? "The answer is that the tax credit's refundable," Clinton says. "It doesn't matter whether you actually have a net tax bill." The room goes quiet.

Watching Clinton in Iowa is like watching Gandalf the White -- a familiar and comforting presence, whose magical powers seem too good to be true, come back from another realm to save the day. Clinton's magical power is to make tradeoffs disappear. Won't universal health-insurance lower the quality of care? No, says Clinton. If you paid doctors according to how well they treated patients, not how many tests they ordered, costs would drop and quality would rise. Won't reining in global warming hurt the economy? Not a chance: "Greening" our buildings will cut power usage by 30 percent and spawn whole new industries.

Okay, fine, but what about that other tradeoff? What about change versus experience? Nonsense, Clinton says. "As long as I have known [Hillary], she's been a word-class change agent." We hear about how a young Hillary helped author the report that led to the Individual with Disabilities Education Act. How, as first lady of Arkansas, she imported a parenting-skills program from Israel that had expanded to 25 other states by 1992. Hillary engineered a school-reform plan that, ten years later, moved one expert to label Arkansas schools the most improved in the country. "She did that with no public office," Clinton says.

Not that any of this necessarily translates into a single vote. Bill's charisma is distinctly his own -- if anything, the comparison with Hillary diminishes her. Ditto for the recitation of Hillary's accomplishments -- on some level, they only remind you that she was second fiddle. But there is this: Hillary was part of a world-famous political brand -- Clintonism -- which Bill's appearances have a way of rehabilitating.

We in the pundit class tend to deride Clintonism as ideologically empty and politically craven. "Clintonism was about winning," Susan Estrich tells Matt Bai in his recent New York Times Magazine essay. There's a kernel of truth to this. (Though, as Bai points out, the philosophy Clinton laid out in a series of speeches in 1991 closely foreshadowed the way he actually governed.) But even if Clintonism was light on ideology and with polls, watching Bill reminds you it was also heavy on good-faith. "It's better to fail struggling in the right direction than to succeed taking the country in the wrong direction," Clinton says near the end of his appearance. Everyone in the audience murmurs in agreement. Then, a little later, he says of George W. Bush: "If Bill Clinton was for it, there must be something wrong with it." More murmurs and some laughs. Sitting in this high school atrium, watching him mesmerize his thirteen-thousandth audience, you can't help feeling that if Bill Clinton is for something -- or someone -- then it must be right.
By Noam Scheiber
If you like this article, go to www.tnr.com, which breaks down today's top stories and offers nearly 100 years of news, opinion and analysis 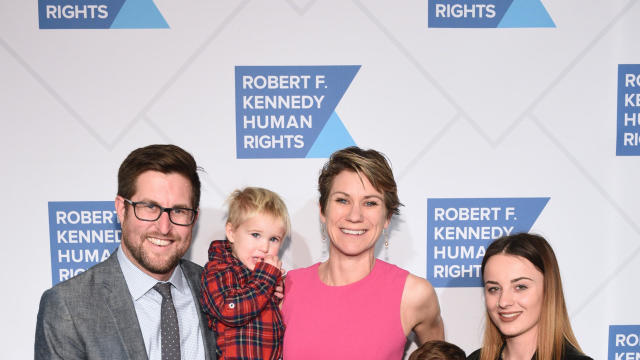