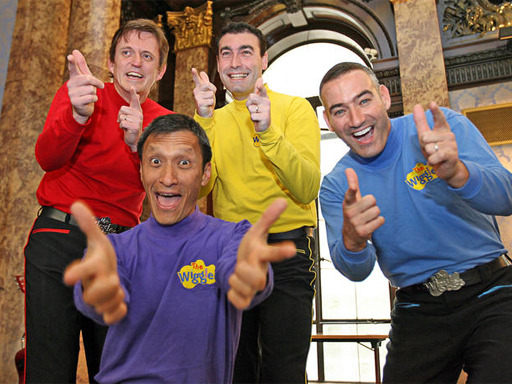 While the band got its start in the U.S. touring with a purple dinosaur named Barney and has an audience under the age of 5, its members are rock stars in their own right.

The album, "The Wiggles" achieved Gold and Platinum status and now the band is recording a song with country star Keith Urban.

So who is this pre-school entertainment sensation?

The Wiggles are children's entertainers who have rewritten the book about how children can be entertained with song and dance.

Sam Moran (Yellow), Murray Cook (Red), Jeff Fatt (Purple) and Anthony Field (Blue) and the characters they have created are now a part of the lives of so many children across the globe.

They are celebrating their 19th year together, selling more than 24 million DVDs, 8 million books and 8 million CDs worldwide. They have sold out concerts on five continents, and their TV show is watched daily by millions of children worldwide.

The Wiggles even beat out Russell Crowe, Nicole Kidman, Keith Urban and Kylie Minogue as the highest earning entertainers in Australia (from 2006 - 2008).

Their latest CD, "Hot Poppin' Popcorn" is in stores now and they came all the way from "Down Under," to join The Early Show on Saturday's "Second Cup Cafe."

So what is The Wiggles' secret to success?

According to Anthony Field, a lot of The Wiggles' success comes from their knowledge of child development.

"A lot of what we do comes from a child's perspective", says Field on The Wiggles' official website. "It s got a lot to do with what songs are about and the language we use, and I like to think we know how to write pretty catchy tunes. Right from the start we gave a lot of thought to what was appropriate for children's music."

The Wiggles was the brainchild of Anthony Field, Murray Cook and Greg Page who met while studying Early Childhood Education at Sydney's Macquarie University.

In what started out as music assignments became a very fun, very lucrative career path. With the help of Jeff Fatt, Anthony's bandmate in the popular 1980's band The Cockroaches, The Wiggles were created. From there, The Wiggles took its finished tape to ABC Music, which released a self-titled album in 1991.

The Wiggles are about to embark on the summer leg of its "Wiggly Circus Live" tour, where the band will visit 26 cities throughout the United States. It will return to North America for the fall leg of the tour on Oct. 9 and will perform in more than 20 cities in both the U.S. and Canada.

The Wiggles can be found exclusively on TV in the United States on 24-hour preschool television channel, SPROUT. The band hosts itsr own three-hour block of programming, Sprout's "Wiggly Waffle," which airs every weekday morning from 6 - 9 a.m. ET.