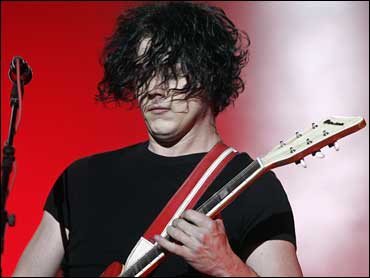 The White Stripes won some new fans during an intimate and unusual gig at a home for elderly British military veterans.

The Detroit duo, dressed in their customary red and white, played for some 20 scarlet-clad Chelsea Pensioners on Tuesday. The retired servicemen, residents of the Royal Hospital Chelsea, wore red tunics and black tricornered hats modeled on the uniforms of 17th-century soldiers.

Jack and Meg White played an acoustic set in the hospital's oak-paneled state apartments, where Mozart once performed.

In contrast to many of the rock band's shows, the audience sat quietly in rows of chairs during the six-song set, which included the Stripes' hit "Hotel Yorba" and the traditional "St. James Infirmary Blues."

"Fantastic!" said retiree Paddy Fox. "Normally we only get the odd carol service in here."

The White Stripes are playing British dates to promote their new album, "Icky Thump," which will be released next Tuesday by Warner Bros. They plan to donate proceeds from another show in London this week to help fund a new infirmary at the Chelsea hospital.

The hospital, founded in 1692, houses elderly veterans on army pensions and those who have been wounded in battle. It is being redeveloped as it prepares to admit women for the first time.