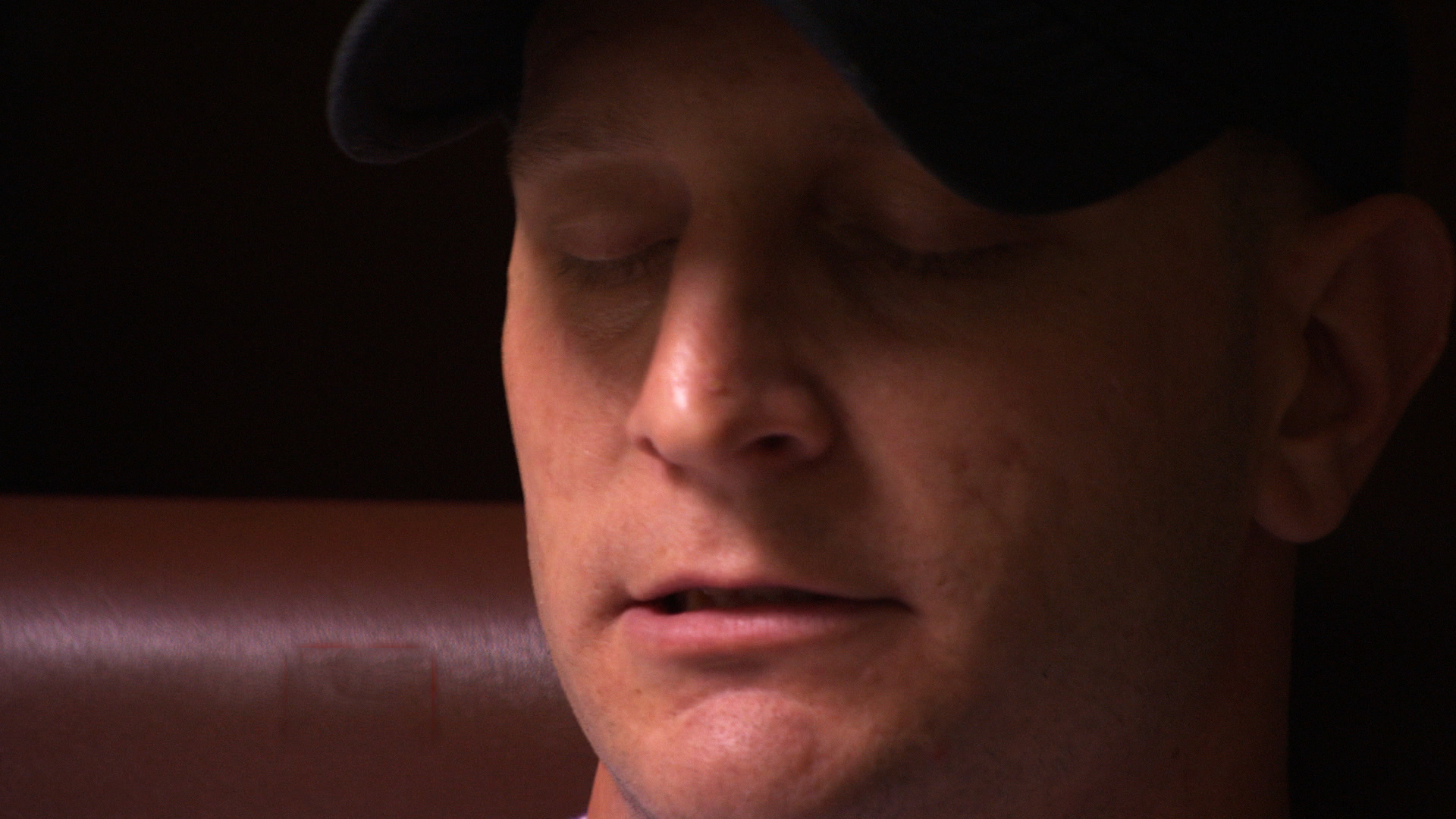 The following is a script of "The War Within" which aired on Nov. 24, 2013. Scott Pelley is the correspondent. Ashley Velie, producer.

We've seen a lot of stories about veterans and post-traumatic stress disorder but tonight, for the first time, we're able to show you new therapies that are changing the lives of vets and their families. Two million Americans have served in Afghanistan and Iraq. The Veterans Administration tells us that one out of five suffers from PTSD. One reason we're seeing so much of it is because many of our troops have been ordered on combat tours three, four or even five times. The VA overwhelmed by the need, decided to try new treatments that were originally designed for rape victims. Over two months we were allowed to sit in and listen as our troubled veterans fought the war within.

[Gene Dowdy: How can you live a life when everyone is afraid of you? You go to town and people say "that's the crazy vet, don't mess with him."

Rob Spraggs: My wife told me, "Something's gotta change or we gotta leave."

Anthony Apellido: When you try to talk to somebody who hasn't been there, hasn't experienced it, they don't understand. And so you just kind of get laughed at.]

The 16 men around this table arrived via Afghanistan, Iraq, or both. Some are here from Vietnam.

[Terrence Stewart: I see that I do have the opportunity to pick myself up at 63 years old and start all over again.]

They've "started over again" many times but their path has led back to isolation, drugs, booze, and suicide attempts. Now they're in the VA hospital in Little Rock, Ark. They will live here eight weeks to break through emotions that have derailed their lives.

For a state by state directory of VA PTSD Treatment programs, click on this link and enter your address OR click directly on your state inside the map to find a facility near you.

To find a therapist outside of the VA click on the link here and fill in your city, state and zip code - check the box Post Traumatic Stress Disorder , scroll down to the SEARCH box and hit enter.

To find further information about PTSD, treatments and other resources go to the National Center for PTSD - If you are in need of immediate assistance or are in crisis please go to this link or call 1-800-273 TALK, press 1

Eric Collins: Depression, anxiety, anger, worthlessness, guilt all those rolled up into one.

Eric Collins: Survivors guilt, why me? Why am I alive? Why are they not? That's one of the hardest thoughts to deal with, you know?

Eric Collins was wounded in a rocket attack in Afghanistan. Over a year, 17 of his buddies died.

Scott Pelley: How did you cope with these feelings of anger and depression and guilt when you first got out?

Eric Collins: Alcohol and lots of it, that's where it started off. And the alcohol led to my depression worsening which led to more substance abused. Crack cocaine is my drug of choice. So my whole life spiraled downward out of control.

To take control, Collins volunteered for one of the new therapies called prolonged exposure. It forces him to work at remembering every detail of what he's tried to forget.

[Eric Collins: Next thing you hear a loud boom, my ears start ringing. And wake up, open my eyes and I'm on the ground...]

Eric Collins: The next I know I hear a loud boom...]

They call it prolonged exposure because Collins will relive the story of the attack five times a session. There's a tape running and he'll listen to the memory throughout the day to break its power.

Kevin Reeder: They've done everything they can to push these memories away. In the process, they haven't gained a full realization of the impact and the meaning that these stories have in their lives. I like to use the term we're staring the dragon in the eye.

Scott Pelley: Where do these therapies come from?

Kevin Reeder: A lot of these therapies came about with survivors of physical or sexual abuse. Those types of traumas.

Scott Pelley: What are the similarities?

Scott Pelley: What does that do for you?

Eric Collins: It helps me to get past the guilt, survivor's guilt. And that's a building block. Every time I get through it I get stronger and it helps every time.

Scott Pelley: It's OK to be alive?

Scott Pelley: And you weren't sure that was true before?

Eric Collins: No, I didn't wanna be alive. I wanted to be right there with them. My whole purpose of life was gone.

"It helps me to get past the guilt, survivor's guilt. And that's a building block. Every time I get through it I get stronger and it helps every time."

Anthony Apellido experienced those multiple tours we talked about. He fought for a year in Afghanistan, spent one month at home, then went to Iraq, and later, Afghanistan again.

Anthony Apellido: The more deployments you get, the more time you spend out there - it just keeps stacking. I mean the first one, it hurts but you don't get really time to heal. And then even another one happens and another one.

[Anthony Apellido: I had no weapon, no one had my back...]

They write about days like that in the other key therapy called cognitive processing.

Kevin Reeder: After a trauma or multiple traumas, often a person can believe the world just is a dangerous place. And so what we do with CPT, Cognitive Processing Therapy, is they write an impact statement at the beginning of therapy to show them the impact of the trauma on their lives and on their beliefs.

They read that statement, about the trauma, to the group then they discuss how their lives are still held in the grip of war.

They plow through a workbook that challenges their guilt with statements like, "I shot a woman in combat therefore I'm worthless" or "My friend was killed by the enemy--I'm responsible." Cognitive processing tries to put the war in the past and help them re-examine who they are today. It's tough. We noticed this on Apellido's workbook:

[Kevin Reeder: How many of you would go back to a deployed environment with your branch of service right now if that opportunity was available? Lotta hands up. Real quick why are your hands going up so much?

Gable Darbonne: You miss it in a way. You miss everything about how hard it wanna, how bitter you got, how angry and emotional, the things you saw and you missed that camaraderie, that brotherhood, sense of purpose, the struggling with things. Man, you it's everything, but you miss it. You mourn that, it's weird. It's that intimacy. It's, you don't, I will never get that back. None of us will ever get that back.]

Gable Darbonne never planned to be part of that brotherhood he mentioned. In 2001, he was out of high school, headed to college. But then 9/11 pushed him to an Army recruiter instead.

Gable Darbonne: My mom, I remember she was crying in the kitchen. She goes, "Gable, you don't know what it's like for boys coming back from Vietnam, how hard they had it and what they came back with." I said, "Mom, it's different, though. We got attacked. We got attacked." I said, "I'm volunteering." I said, "I'll take anything. You know, I'm willing to give my life." That's how strongly I felt.

[Gable Darbonne: I joined to serve my country, I joined to protect my freedoms, my future kids freedoms.]

Darbonne was one of the most thoughtful people we met. He served in Afghanistan and Iraq. One day, his unit was clearing a house. It exploded. Two buddies were burned.

Gable Darbonne: You know we got angry, got mad. Get very angry and we took it out on certain people. You know and you enjoyed it at the time. You did.

Scott Pelley: You did things to the Iraqis that you're not proud of.

At home, the survival instinct didn't let go. Darbonne was like most other vets here - certain triggers brought the instinct back - the smell of diesel returned him to his combat outpost - crowds made him fearful.

For nine years, Darbonne told himself he was OK or would be OK. Then the folks at work urged him to get help. This was Darbonne after seven weeks of self-examination--as they all prepared to go home.

Gable Darbonne: People would always ask me when I came back, "So what do I tell my boyfriend when he comes back?" Or, "How do I approach this with my son?" I said, "When he starts talking, just listen." Yeah, don't judge it. You know, just listen.

Scott Pelley: There is probably a soldier or a Marine sitting alone watching this on television right now.

Scott Pelley: And to them you say what?

Eric Collins: I hope you can find the courage to get help because all you're doing is killing yourself. And you don't have to live like that. There is good people in this world willing to help you and its been the hardest thing for me to do, but I wouldn't have changed coming here for the world.

"People would always ask me when I came back, 'So what do I tell my boyfriend when he comes back?' Or, 'How do I approach this with my son?' I said, 'When he starts talking, just listen.'"

In our two months here, 28 men sat round this table. Three couldn't hack it and dropped out. The VA finds about that: 77 percent graduate with a drop in their PTSD symptoms. It's progress but they have a saying around here -- there is no cure.

Kevin Reeder: I don't think there is a cure for what we're talking about. We're talking about living and putting people more in touch with their lives and emotions and good days and bad days. This isn't cancer, we can't go get it. We have to teach people that they can live with this and live a valued life - a life they want.

Scott Pelley: After eight weeks here, how are you doing?

Gable Darbonne: How am I doing? I don't know yet. That's an honest answer. But I know deep down inside things will work themselves out.