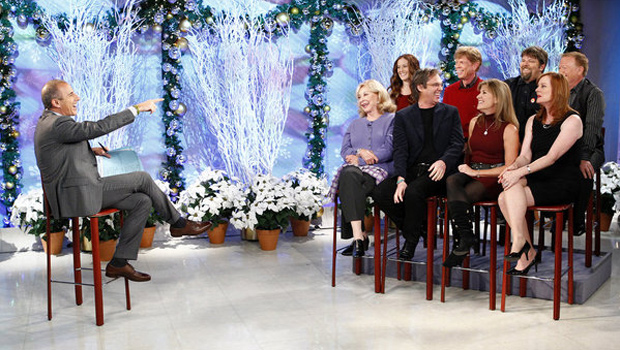 (CBS) Eight members from the cast of CBS' family drama "The Waltons," which aired from 1972-1981, were reunited on the "Today" show this morning.

"The Waltons" was centered on a family growing up in rural Virginia during the Great Depression and World War II. Some of the show's critics complained that the show cast a squeaky-clean sheen on going up during the Depression.

Lauer asked that cast about those who say the show was too sweet. "That annoys me," said Learned, according to Entertainment Weekly. "In the beginning it was not [too sugary]. Toward the end it got a little...fell in love with itself. But toward the beginning we were dealing with book burning in Germany, we were dealing with the Dust Bowl cousins, ...segregation, ....some real issues, as well as the warmth of the family."

The series ran for over 220 episodes and there were seven TV movies. Lauer applauded the cast for handling their celebrity at such a young age - not being in trouble with the law or publishing tell-all memoirs, according to MSNBC.

Cotler noted that times were different then.

"It was a very different time to be famous," Cotler said. "When 'Walton' fans meet you, they feel like you're family...people just want to give you a hug."