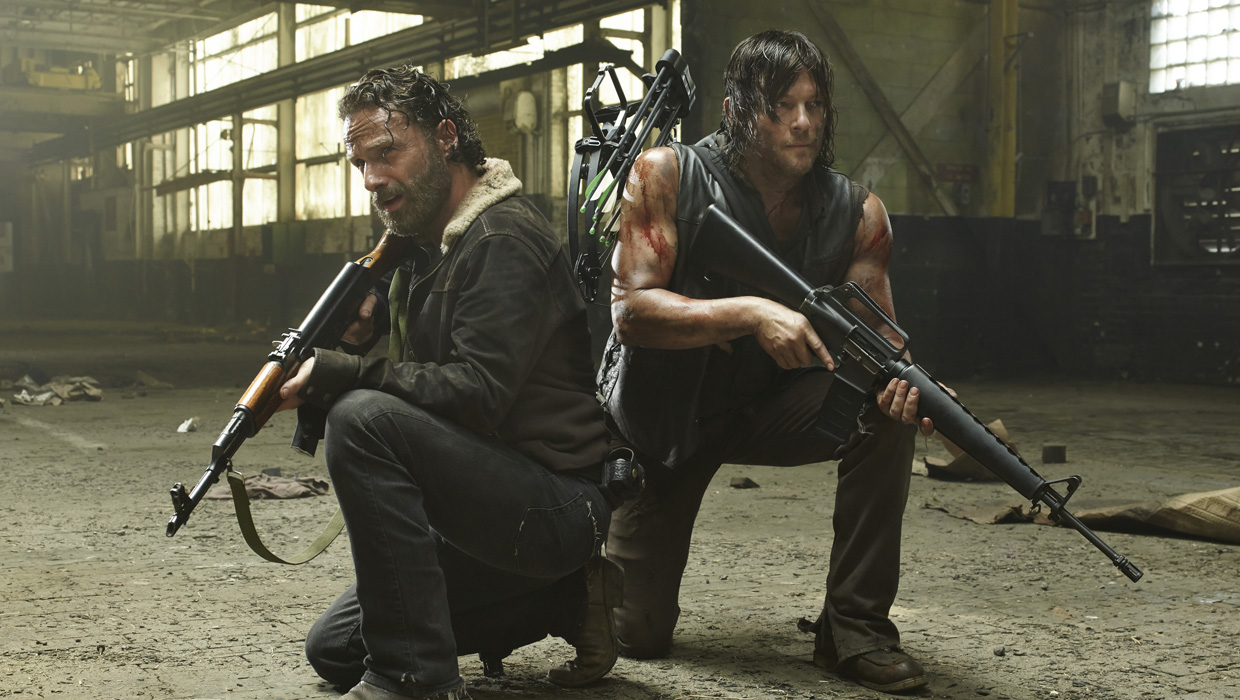 WARNING: We're about to discuss some of the most jaw-dropping moments from The Walking Dead's season five premiere. If you do not wish to be spoiled, turn around and return to your train car in Terminus--for everyone else, read on...

Was this the best episode in "The Walking Dead" history? Abso-freakin-lutely!

The smash AMC series crawled back into our lives Sunday night with an episode so riveting, it put all of this seasons' fall TV premieres to shame. After a mind-blowing season four cliffhanger, fans have been desperately wondering what would happen to Rick (Andrew Lincoln) and Co. after the sanctuary of Terminus turned out to be a slaughterhouse -- and now we finally have our answers.

Here's what you need to know...

The very beginning of the episode featured one of the most gripping and intense moments "Walking Dead" fans have ever seen: Rick, Daryl (Norman Reedus), and Glenn (Steven Yeun) were bound and dragged into a warehouse and forced to kneel over trough. One by one, the twisted citizens of Terminus began slitting the captures' throats, but just before it looked like our beloved Glenn was doomed, a huge explosion shook Terminus and ruined their murderous plans.

That distracting blast was all thanks to Carol (Melissa McBride) who embarked on a one-woman mission to find and save her friends from the cannibalistic hellhole. Armed with her wits and covered in zombie blood, Carol lead a walker invasion through the blown-away gates and even managed to murder Mary, Terminus' head BBQ fanatic.

While the citizens of Terminus -- aka the Termites -- were running around and trying to combat their new undead visitors, Rick and the gang freed the rest of our beloved cast from their train car prison, and fought their way to freedom. Once they were safely beyond the burning compound of Terminus, Carol greeted her former family with a sheepish smile and confirmation that she was indeed the MVP of the episode.

In addition to a truly heartwarming Carol and Daryl embrace, "Walking Dead" fans were finally treated to a moment that we've been craving to see for more than eight months: Rick and Carl finally reunited with baby Judith! The episode ended with a short, but amazing tease as fan-favorite character Morgan Jones (Leannie James) was seen headed towards Terminus.

What was your favorite moment from "The Walking Dead" season five premiere? Sound off in the comments below!