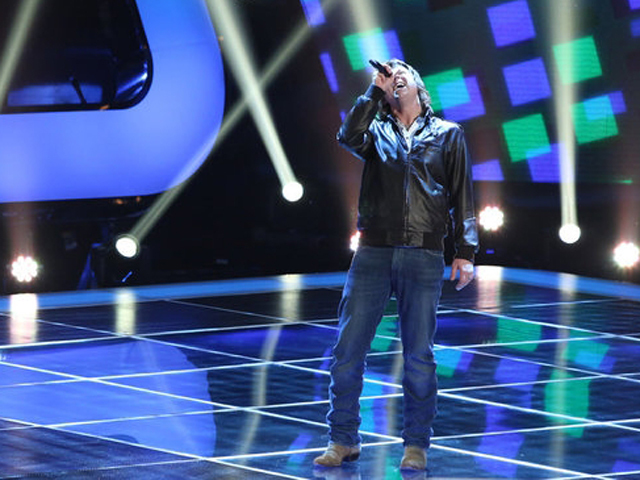 (CBS News) "The Voice" returned Monday night for a third season with the first round of blind auditions.

Coaches Adam Levine, Cee Lo Green, Christina Aguilera and Blake Shelton fittingly kicked off the two-hour episode with a rendition of The Rolling Stone's "Start Me Up."

The reported feud between Aguilera and Levine appeared to have simmered - at least for the cameras.

"Christina without a doubt has one of the best voices of our generation," Levine said at the start of the show.

Soon, it was down to business, as the first round of contenders tried to win over the coaches and make it on to a team. Scottish rocker Terry McDermott, who now calls New Orleans home, got the night going with a cover of The Who's "Baba O'Reilly." He wound up impressing the panel, with Shelton calling him "a real rock and roll singer." He picked Shelton as his coach.

De'Borah took the stage next to perform Train's "Hey, Soul Sister." Both Green and Aguilera turned their chairs. She goes with Aguilera as coach.

Country music filled the stage with Gracia Harrison, who sang "I Wanna Be a Cowboy's Sweetheart." Levine was impressed. "By far, you are the best country singer we have ever heard on this show...by far," he said. But Harrison chose Shelton as her coach; Levine wasn't pleased.

Devyn DeLoera took on the Aguilera song, "Ain't No Other Man," prompting Shelton, Levine and even Aguilera to turn around. It was no surprise, though, when DeLoera chose Aguilera.

Bryan Keith, the son of Grammy-winning Latin artist Ray De La Paz of the Spanish Harlem Orchestra, hit the stage next to perform Bruno Mars' "It Will Rain." Levin scored his first team member of the season with Keith. "Bryan Keith was the win of the day," Levine said. "Finally!"

The evening also featured a familiar face. Daniel Rosa auditioned last season and returned to perform Gotye's "Somebody I Used to Know." "Daniel is an amazing example of exactly what can happen when you don't give up," Aguilera said. Rosa chose Green's team.

Joe Kirkland, one-time backup singer for the pop-punk band Artist vs. Poet, sang The All American Rejects' "Gives You Hell" and became part of Levine's team.

The last performance of the night came from Trevin Hunte, who peformed Beyonce's "Listen." He chose team Cee Lo.

A few contestants failed to make it on to any team: Anita Antoinette, Garrett Gardner, and Jessica Sharpe, who got emotional after the rejection.

"The Voice" returns tonight at 8 p.m. ET with part two of blind auditions. The third episode airs Wednesday and will go up against Fox's "The X Factor."

Tell us: Who was your favorite performer on the season premiere of "The Voice"?