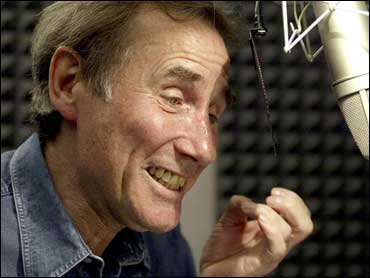 Harry Potter fans are about to go wild. Saturday, the sixth installment of the spellbinding series is set to be released. And while the plot has been top secret, there's one man who has already read the book.

"I know who dies," Jim Dale tells CBS News correspondent Mika Brzezinski. He is the one who reads the Potter series for audiobooks.

But don't expect any revelations from him. Dale says he's guarding all the secrets of book 6, "Harry Potter and the Half-Blood Prince," to protect the magic for children.

"The worst thing is if somebody leaks it to them," he says, "because then goes the great excitement of finding out for themselves."

A lot of the excitement's been provided by Dale himself. He is the British stage and screen actor who's brought J.K. Rowling's magical world to life by giving a voice to every wizard, witch and creature in the series - every single one. How many creatures are we talking about here?

He says, "Including people? So far, she's written over 200 characters."

And for each, he manages to find a distinctive voice.

"Ron is very excited," he notes, demonstrating the voices. "Dobby is very respectful."

And of course, the most famous voice: "Well, Harry. I decided in the early days, instead of trying to switch to a voice of Harry, just use my voice, a younger Jim Dale. And over the years, as Harry has aged, then I've allowed my voice to become a little more normal."

It's actually grueling work to do the tapings. It involves two weeks of talking nonstop for eight hours a day.

So the question is: Do people ever recognize his voice?

"Oh, yes. Oh, yes, yes," he says, "I took my grandson into McDonald's to have a hamburger, and I'm asking in my voice, and I turn around, and two kids there with their eyes so wide open. He said, 'Are you...' and he said, 'Do Dumbledore!' So I'm ordering hamburgers as two different characters from 'Harry Potter.'"

How does he keep track of all the voices? An electronic form of magic.

He explains, "So I then have a tape of, for instance, in the last book, there are 134 different voices that I can rewind or forward and find out exactly what that voice was like 50 pages ago, when I did it for the first time."

Like the books, the tapes and CDs have been a publishing phenomenon. The secret to their success could be that Dale himself finds the stories as magical as any child could. So which character does he see himself as?

"I'd like to think of myself as Harry," he says, "I'd love to be able to do what Harry does. All of us would, whether you're an adult or a child, bring a bit of magic into the world."

Dale will hold a midnight reading when book 6 comes out. As for J.K. Rowling, she'll be at Edinborough Castle for her midnight reading, which will be broadcast around the world via the wizardry of satellite.