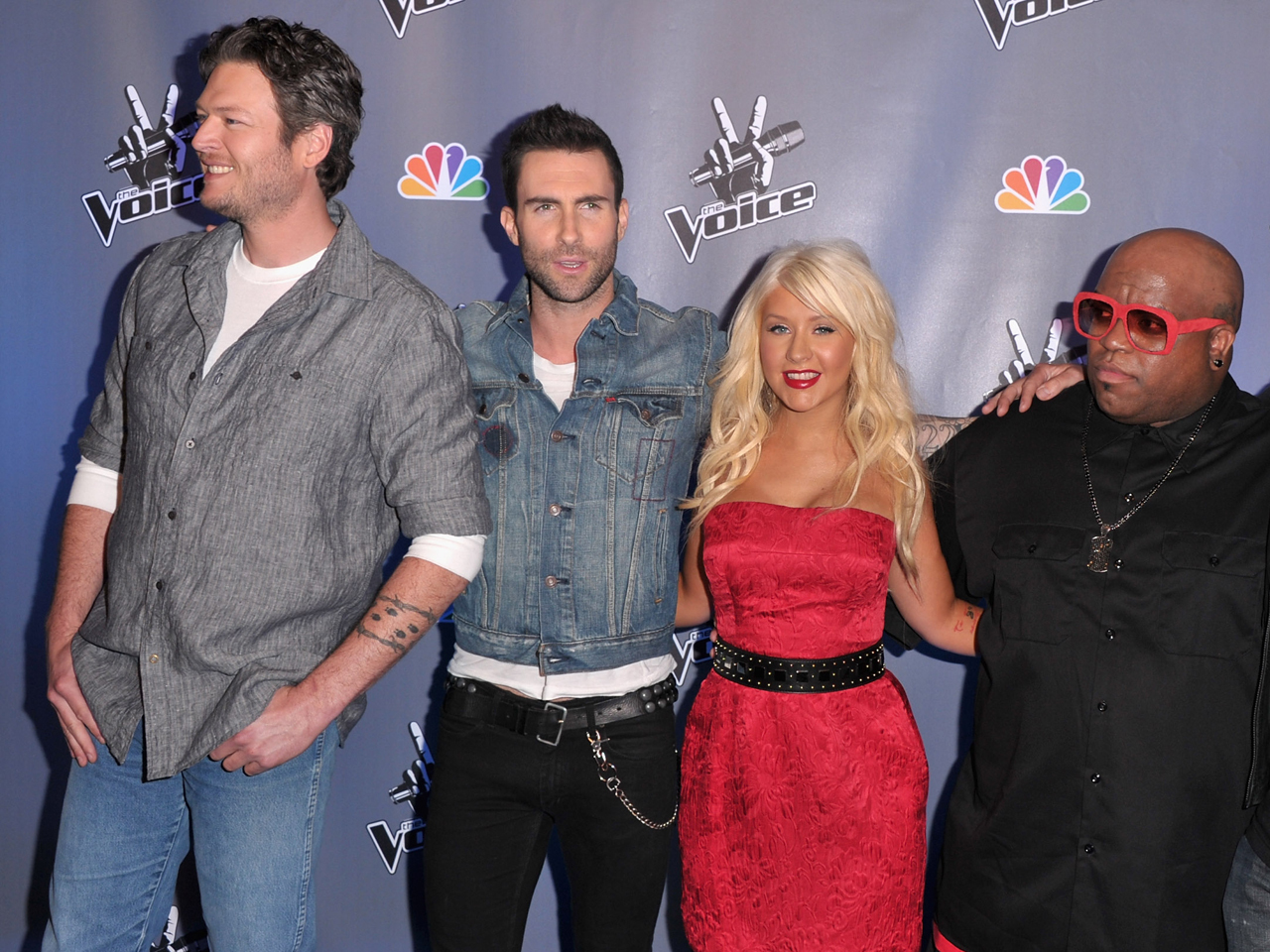 The NBC series, which debuted Tuesday with a two-hour taped episode that will be repeated Wednesday, offers a distinctive gimmick: Contestants are initially heard but not seen by a panel of pop stars.

It's when Christina Aguilera, Cee Lo Green, Adam Levine and Blake Shelton spin around in their thronelike chairs that they glimpse the singer they backed or passed on. The pros themselves compete to assemble a team of would-be pop stars, with the goal of guiding one toward a record contract and a $100,000 prize.

No need to alert the Society for the Protection of Pretty People: The deck is stacked with some talented lookers.

Viewers may need to take a breath as they encounter unfamiliar terrain: The judges aren't judges. They're "coaches" who also serve as hands-on mentors; each coach has to dump half of his or her team before the audience steps in to vote, starting in June; NBC late-night host Carson Daly is in charge.

And, some may say mercifully, "The Voice" skips an "American Idol"-style extended audition process. The NBC series jumps into action with singers either recommended by industry insiders or otherwise scouted in nationwide performance spaces. That's not to say surprise is lacking, as proved by a lively New Jersey homemaker and a Florida belter in the first episode.

There's a handful of familiar faces, including former "American Idol" contestant Frenchie Davis, who has already appeared on Broadway in "Rent" but says she still yearns for a recording career.

The big twist comes when contestants get to turn the table on the panel. If more than one pro wants them on their team, it's up to the contestant to accept or reject the likes of Maroon 5's Levine or country star Shelton.

The device would be even more engaging if the contestants didn't seem to be drilled in the reality TV art of theatrically dragging out decisions. Word of advice: Leave the drama to a future series for aspiring Oscar or Tony winners.

More entertaining is the panel and its interplay. Shelton turns out to be a natural comic, Levine an avid competitor and Green a charmer. Aguilera, whose recent stumbles include a mangled version of the national anthem, settles comfortably into the role of queen bee, sparring nicely with her male cohorts.

Executive producer Mark Burnett said it was a meal, on him, that fostered the group's camaraderie.

"My best move as a producer was saying to the coaches, `Here's my credit card, go out to dinner, the four of you.' It allowed them to know each other. In the end, it's chemistry that counts. If they're having fun, the audience has fun."

But is there patience for yet another talent show? After "American Idol" folds its tent for the season in May, NBC's own summer series "America's Got Talent" starts up, and then Simon Cowell's "The X Factor," based on his U.K. hit, debuts this fall on Fox. There's also Bravo's new songwriting contest, "Platinum Hit," starting in May, and genre-oriented iterations such as CMT's "Next Superstar."

NBC has heavily promoted "The Voice" and is also seeking an edge by ramping up the role of the Internet and social networks, employing a "social media correspondent" to entice viewers to engage with the show.

Burnett, whose hits include "Survivor" and "The Apprentice," brushes aside the issue of market saturation.

"At this point, for Americans, "X Factor" is just a name. No one has seen it," he said. Besides, he said, there's proof of the public's insatiable appetite for watching people strive on-camera for glory.

In Holland, home of the original "The Voice," the show became "huge" despite existing franchises "Holland's Got Talent" and "The X Factor."

That's in a country "the size of Rhode Island," Burnett said, adding cautiously, "Who knows what will happen here."