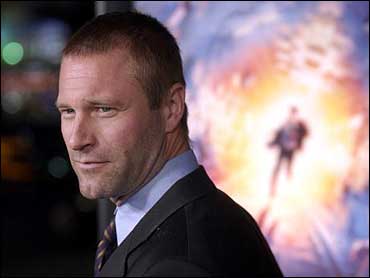 Actor Aaron Eckhart is best known for his critically acclaimed performances in the films "Erin Brockovich" and "In the Company Of Men." In his latest film, "Paycheck," he plays a billionaire entrepreneur who promises lucrative compensation to an employee played by Ben Affleck.

In John Woo's thriller, Jimmy Rethrick (Eckhart) and Michael Jennings (Affleck) were buddies who wanted to save the world through technology, but in the end Rethrick ends up using his best friend, explains Eckhart.

He tells The Early Show co-anchor Hannah Storm, "I create a machine that can see into the future. I fund it and I organize it and then he turns his back on my project, which makes me mad, so I have to try to kill him."

In real life, Eckhart says the thought of looking into the future scares him. He says, "Luckily, we haven't gotten there as far as I know, yet. I can't watch myself on television and would never be able to watch myself in a futuristic machine."

The reason he feels uncomfortable watching himself on TV is because he likes to be in control, he admits.

Referring to his work in "The Pledge" under Sean Penn, Eckhart says, "Sean is great because he's an actor and he allows you the time to create with him and the crew and he has complete control. Sean is a control freak, too, by the way. We're all control freaks so I'm not an anomaly. I'm not normal, but I'm not an anomaly. You know, he makes actors comfortable and creates a safe place. John Woo, also."

But now that he had his share of villain characters, he says he is ready to be the good guy. "This is my last bad guy. Forget about it," he says. "I want to do a romantic comedy or family dramas."