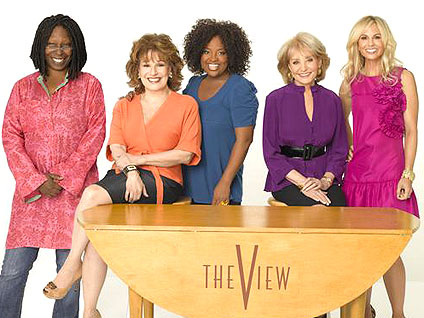 NEW YORK (CBS) "The View" has been put on the hot seat by the Gay and Lesbian Alliance Against Defamation (GLAAD) and gay rights advocates, who took out a full page ad in Sunday's Variety magazine to condemn comments made by guest host comedian D.L. Hughley and co-host Sherri Shepherd on a June 22 broadcast of the ABC talk show.

Controversy sparked when Hughley along with "The View" co-hosts spoke on the issue of gay and bisexual men who donate blood.

Hughley and Shepherd attributed increased HIV rates among straight black women to black men who are secretly gay (or "on the down low").

"When you look at the prevalence of HIV in the African American community, it's primarily young women who are getting it from men who are on the down low," Hughley said.

The Variety ad, cosigned by the Black AIDS Institute and the National Black Justice Coalition, reads in part: "The Centers for Disease Control has publicly disproven this myth."

Since June 22, thousands of people have written to ABC, asking that "The View" provide correct information to viewers, according to EOnline.com.

Shortly after the episode aired, GLAAD encouraged its supporters to contact ABC and show execs and demand an on-air apology and correction.

In a statement released by a publicist at ABC to Celebrity Circuit, the show's network says that D.L. Hughley's thoughts on the transmission of HIV/AIDS during the June 22 broadcast was "his interpretation of the data about one way the virus can be transmitted." The statement added, "The topic of HIV/AIDS has been raised many times over the show's 13 years, with many voices and opinions contributing to a conversation that we expect to continue as long as 'The View' is on the air."

GLAAD, however, wants an on-air retraction and statement from "The View."

The organization released a statement to Celebrity Circuit via Rashad Robinson, senior director of programs at GLAAD: "Since ABC and 'The View' still refuse to address the harmful effects of their misinformation on-air, we hope that today's ad and the media attention it attracts will educate viewers and media professionals about the dangerous inaccuracies perpetuated on the program."

Barbara Walters and known gay rights proponent Whoopi Goldberg were absent from the June 22 broadcast. Walters, Goldberg and Joy Behar have each been honored by the advocacy group with GLAAD Media Awards in the past.

ABC and "The View" have not made any immediate plans to address the controversy on-air.