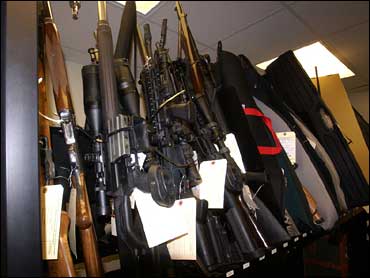 (CBS/Cami McCormick)
Walking through an evidence room at the ATF headquarters in El Paso, an agent points out a variety of deadly weapons — seized before they could make their way across the border into Mexico.

"This is a typical AK-47," he says, pulling one from the rack. Pointing out another firearm, he explains that it is capable of higher-caliber rounds that can penetrate armored vehicles. Yet another has a huge scope, "which could be used as a sniper-type rifle."

(CBS/Cami McCormick)
And then there is the "cop killer," (at left) a Belgian-made handgun capable of firing armor-piercing ammunition.

These are the weapons of Mexico's drug war.

With the murder rate in Chihuahua State (which includes Ciudad Juarez) going from 600 in 2007 to more than 2,700 in 2008, ATF Assistant Special Agent in Charge of the Dallas Field Division, Michael Golson, puts the blame squarely on "firearms trafficking."

Secretary of State Hillary Clinton, on a visit to Mexico, said Wednesday that America's inability to prevent weapons being smuggled across the border is causing the deaths of Mexican police officers, soldiers and civilians. (Read a full report on Clinton's visit.)

Now, the ATF is about to get some reinforcements under an initiative announced this week by the Obama administration. The money will help track down who is buying these weapons and from whom.

"We know for a fact that a lot of the weapons are coming from firearms dealers," Golson said. "They're coming from gun shows and flea markets." Often, he says, private collectors are selling their weapons because "they don't have the same restrictions."

Complicating things for ATF agents, the weapons often change hands before crossing the border. After which they can fetch a hefty profit.

While much of the gun violence has, until now, involved one drug cartel battling another, there is concern these heavily-armed organizations could turn their weapons on Mexican forces who have flooded the border area, and the war could enter a new phase.

"They have high quality weapons," Golson said, referring to the powerful cartels. "I won't necessarily say they're better than what the Mexican soldiers have, but they're compatible. They have pretty heavy fire power, military style weapons."

Enough to threaten the Mexican military?

"Sure," Golson said. "There are enough weapons going in. It could be a definite challenge for the Mexican military."