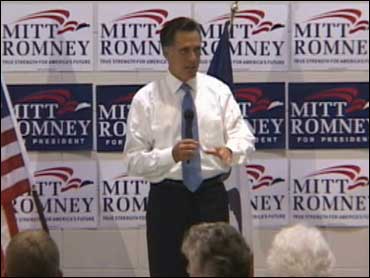 The story was written by CBS News reporter Scott Conroy.


Presidential candidates are supposed to be upbeat -- the demands of the job they're seeking require it. But Mitt Romney's public enthusiasm along the campaign trail stands out in a crowded Republican field.

In New Hampshire on Labor Day, the former Massachusetts governor didn't just walk through the Milford parade -- he jogged, his blue polo shirt drenched with sweat as he zigzagged across the street, shaking hands at a machine-gun rate.

Romney's energy is reflected by his jam-packed schedule of public events, and he is unvaryingly reared and ready to go at each of them. He smiles easily and is fond of the word, "Wow."

At a county fair in northwest Iowa on Saturday, a Romney staffer handed the candidate a microphone to address a small crowd.

"Wow, look at that -- there's a microphone!" the blue-jean clad Romney marveled, as if the device were some kind of rare artifact.

Whenever he works the crowd, Romney tries to guess the ages of the children he meets, visibly enjoying the game. As a pack of harnessed Clydesdales trotted by at the Iowa state fair, Romney stared with his hands on his hips, looking genuinely impressed by the spectacle:

"Wow," he said, before bounding off to marvel at some of the agricultural machinery on display.

For Romney, it's all part of his political message. Last week, the campaign launched a new television ad in South Carolina, appropriately entitled "Energy." The ad touts Romney's accomplishments in business and government with shots interspersed of him jogging, his face flushed and his feet pounding against the pavement.

The ad was released the day before Fred Thompson declared his candidacy and in the early voting state where Romney has the most work to do in winning support, according to public polls. Thompson suffers from perceptions of a lackluster work ethic, and the shots of Romney in the "Energy" ad present a stark contrast to the methodical Thompson.

Romney looks exceedingly fit for a man entering the seventh decade of his life, and his vigor provides the campaign with a favorable contrast in the face of questions about John McCain's age and Thompson's laid-back style.

National frontrunner Rudy Giuliani enjoys a reputation for working hard to get things done in New York both before and after 9/11. As the nation gets to know his own biography, Romney hopes to match the former mayor's accomplishment-oriented reputation.

And, he wants to let voters know he isn't planning on slowing down any time soon. "You might think at the end of the day I must just drop into bed and fall asleep and hardly be able to wake up," Romney said at an Ask Mitt Anything breakfast in Cherokee, Iowa, on Saturday.

"The truth is that at the end of the day I'm so energized from the people I meet that I can't fall asleep and I have to read for an hour or so to sort of tune down the body energy," he added.

Just to drive the point home, Romney made sure to tell the crowd about the jog he took early that morning before arriving at the event.