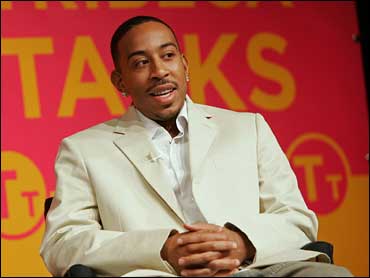 One minute he's Ludacris, rapping about "Pimpin' All Over The World." The next minute, he's on screen trashing hip-hop as a character in the Oscar-winning movie "Crash."

Will the real Christopher Brian "Ludacris" Bridges please stand up?

Speaking during a question-and-answer session at the Tribeca Film Festival, Bridges explained the two sides to his persona.

"I like being different, I like having fun, I love just having a good time, so that is what Ludacris is all about," he said. "Chris Bridges is more the businessman. (He's) more laid back, just a business-minded individual. The man behind 'Ludacris' is 'Chris Bridges.' It's almost like a split personality."

Photos: Showtime At The Grammys

Bridges is constantly surprised by people who tell him they know him from his movies and not his music, even though he's a multi-platinum artist with a career that spans more than a decade.

"I've had numerous individuals come up to me and say I know you from your movies but not your music," he said. "I've been blessed to be in some very impactful films."

Bridges said he never knew he had the talent to act until director John Singleton asked him to try out for the 2003 film, "Too Fast, Too Furious."

His "audition" took place backstage 15 minutes before one of his concert performances.

"They brought a camera behind stage and I read my lines as if I was reading them to someone on camera and I got the part," he said. "It was crazy."

Being in the public eye, doing interviews and music videos has helped him make the transition to film, Bridges said.

"Half of the battle when you do movies is being comfortable in front of the camera, with so many people doing their job behind the camera, and being able to focus," he said.

Focus is what made Bridges famous in the first place. He said he's actively pursued a career in music since the age of 9.

"My first song was 'I'm cool, I'm bad, I might be 10 but I can't survive without my girlfriend,'" he laughed. "I needed a word to rhyme with 'girlfriend' so I lied and said I was 10. And basically when I did turn 10, I could sing the song with more confidence."

Noting the popularity of young Atlanta-based artists like Kris Kross, Ludacris made the move south while still a pre-teen. He worked with different groups and recorded numerous demos before landing an internship at a local radio station.

"I thought, 'You know what would be smart is if I make a place for myself where I get a job up here, therefore it would be a means to an end,'" he said. "I went up there, I got an internship. I was like 'I'll work for free.'"

Bridges used the opportunity to get his voice heard, first by recording on-air intros to each disc jockey's show and eventually hosting his own slot.

He later parlayed his popularity in Atlanta, a hotbed of rap's Dirty South movement, into a major label deal with Def Jam.

Since then, Bridges has sold more than 10 million records as Ludacris and earned three Grammy awards.

His acting career is well on its way, and he'll be appearing next on the May 22 season finale of "Law & Order: SVU," where he will reprise his role as Darius Parker, the nephew of fellow rapper Ice-T's character, Det. Odafin Tutuola. He plays the Angry Elf in the holiday movie "Fred Claus" starring Vince Vaughn and Paul Giamatti.