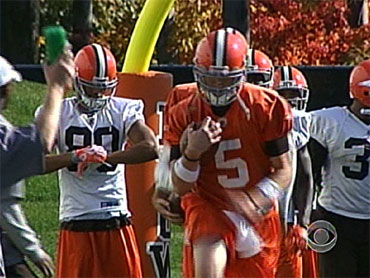 With equipment for a U.S. infantry division waiting offshore, Turkey continues to hold out for more economic aid before it agrees to host American forces for a possible attack on neighboring Iraq.

The U.S. is pressing for a quick resolution to the dispute, which could postpone the start of a U.S. invasion and force military planners to rethink their Iraq strategy.


Col. Mitch Mitchell, who is a CBS News consultant, says he's surprised at Turkey's demands, "because we gave them a fat package of support to begin with and from all appearances, they're trying to sweeten the pot. We've been with them on the EU and other important issues, and now, at the critical hour, they've pulled an end run on us."

While he thinks the impasse will be resolved and Turkey will ultimately grant access to U.S. forces, Mitchell says the start of the war would be only slightly delayed if Turkey withholds its cooperation.

"I think we were going in on the 3rd of March," before the Turkish problem arose, Mitchell says. "But it now appears that may be pushed back a couple of weeks."

Should Turkey balk, Mitchell says the U.S. would need 1½ to 2 weeks to send equipment down through the Suez Canal to its southern staging area in Kuwait. Combat troops could get to Kuwait faster, but they'd need some time to acclimate and get in some training.

"But they should be ready to go three weeks from now," he says.

While Mitchell doesn't think a short delay will compromise the readiness of U.S. forces, he says it's hard for troops to stay at battle pitch indefinitely.

"You can only stay at that tense mode for so long," he says. "You want them to go in like skiers on a downhill, a little bit scared. It makes them focused and concentrated. You never want to go in relaxed."

From a strategic point of view, Mitchell says the absence of a northern base of operations in Turkey "is not a showstopper, but it's much less desirable."

"We prefer coming down from the north," he says, "but there are other options." The U.S. military "has capabilities for insertion at any location in Iraq even without a northern base."

With or without a base in Turkey, Mitchell doesn't think the war will be a long one.

"Combat could last less than a week," he says, "unless we encounter unexpected resistance in the cities, which is unlikely."

The first thing the troops will do, Mitchell says, is to take out Iraq's ability to fly airplanes, their command-and-control networks, and their air defense network.

Since Iraq has no navy, "that will leave a three-dimensional U.S. force – land, sea and air – against a one-dimensional Iraqi force that can't see, hear or communicate."

Mitchell doesn't think chemical or biological warfare will be a major factor; although Saddam Hussein has these weapons, delivery of them will be difficult.

The more vital issue, says Mitchell, is not whether Saddam will order the use of weapons of mass destruction. It's whether his commanders will follow his orders and fire on their own people and risk killing tens or hundreds of thousands of Iraqis.

The challenge for U.S. forces is to "defeat Iraqi forces with overwhelming power and force them to surrender quickly. We need to convince the Iraqi people that the war is over and Saddam's regime is ended."

That means we "may have to go in to Baghdad and physically control the government."

With that in mind, he says civil affairs planners will be coming in almost immediately, following on the heels of the troops to begin the restoration of essential services.

Even more important than these military concerns, Mitchell says, are the political and diplomatic ones, especially as they pertain to post-war Iraq.

The Bush administration, he says, would be wise to make every effort to win U.N. support for the war effort, and even more importantly for the post-war occupation.

Animosities of old that were held in check by fear and largesse in Saddam's regime – between Shiite and Sunni Muslims, between those who flourished under Saddam and those who suffered – will be hard to contain once unleashed.

Trying to keep all these contentious factions together after the war and then "creating some kind of coalition government where they can all come together and kiss, is going to be very difficult, if not impossible."

"It would be a disaster not only during but after the war if we don't have U.N. backing. If not, we're stuck with it and we'll come out looking like the bad guys."

The careful military planner has to take all those political factors into consideration, Mitchell says. "If there was ever a war where the after-war effort is important, this is it."