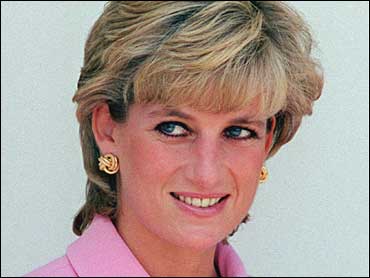 The Princess of Wales died on Aug. 31, 1997, and the dreadful circumstances surrounding her death continue to haunt her admirers.

Ten summers ago, Diana was a divorced princess, cast out of the royal family - embarking on a summer fling to help heal her wounded heart.

Dodi Fayed, son of a multimillionaire with yachts and planes and bodyguards, was a charming diversion. She didn't hesitate to put this new affair on display and even called photographers as they floated around the Mediterranean. Steve Wood was there for the Daily Express.

"It was million pound picture time," he told CBS News correspondent Sheila MacVicar. "It seemed it didn't matter how much money you spend on chasing her."

It was the picture of Diana kissing Fayed that pushed the stakes higher.

"All of a sudden all bets were off by the time Dodi and Diana came to Paris at the end of August it was like a feeding frenzy," said Paris bureau chief Newsweek, Christopher Dickey.

On the last night of their vacation, it was no secret the couple had come to Paris. Photographers were waiting at the Ritz Hotel, owned by Dodi's father, Mohammed al Fayed, as they arrived for dinner. Witnesses said Diana was visibly upset. Dodi looked annoyed.

Someone tracked down the acting head of security, Henri Paul, and told him the boss's son and the princess were in the house. That began the chain of events that turned to tragedy.

Dodi insisted that they leave the hotel and return to his apartment.

"Mohammed Fayed gave permission for Henri Paul to drive the car," investigative journalist Martyn Gregory said. "Dodi had this idea, 'We will leave our two chauffeurs outside the Ritz at the front door. We'll send the bodyguards out there and the press will then think "Aha! Diana and Dodi will be leaving with them." And then we will slip out the back door with Henri Paul at the wheel.' "

What no one knew was that Paul, the man they chose to drive them, had been drinking heavily.

"Now of course nobody has ever said that the Fayeds or anybody knew that Henri Paul was drunk, but they did know that he was not a driver, in 10 years of working for Mohammed Fayed, Henri Paul had never driven him anywhere, once," Gregory said.

Jean Claude Mules was the senior French investigator. He said Paul couldn't say no to his boss and refuse to drive the couple. With Paul at the wheel, a bodyguard beside him, the car sped off, getting up to nearly 70 mph where the speed limit was 30.

"There is nothing to suggest that anybody was afraid, that they were running in fear," Dickey said. "Everything we know about that night is that they were trying to prove they could ditch the photographers."

By the time Princess Diana in her speeding Mercedes reached the alma tunnel, the paparazzi had been left behind. Both the British and the French investigations show the Mercedes was on its own and the photographers were hundreds of yards away.

The road they were traveling on dips and turns to the right. At a high speed, it's easy to loose control. The heavy Mercedes they were riding in came upon a slow moving white Fiat. The debris left on the road and paint scrapes on the car show that there was a collision.

It was an incredibly violent crash. No one was wearing a seatbelt. Paul and Fayed were dead. Dr. Frederic Maillez, an off duty emergency doctor, stopped his car 30 seconds later.

"I remember almost nobody around me walking toward the wreckage," he said. "And my first intention was to see if there were any victims."

An off-duty fireman was already tending to the bodyguard in the front seat. Without knowing who she was, and with little equipment, Maillez focused on Diana.

"She was laying on the floor of the car, she was unconscious," he said. "The first thing I had to do was to lift up her head, apply the respiratory bag so she could breathe a little bit better. What I could see is that she did not have any injury on her face. Her face was intact. Just a few drops of blood and that's it. She was still very beautiful, very sophisticated lady."

As Maillez worked, others began to arrive including the photographers who had been left behind.

American tourists Robin and Jack Firestone passed through the tunnel.

"There were just flashing lights which turned out as I (was) getting closer that there were photographers all over all over the place," Robin Firestone said.

"They were totally relentless, taking photographs from every conceivable angle," Jack Firestone said.

That night 11 photographers were arrested, suspected of causing the crash and failing to aid the injured.

"So the world had this image of these photographers with their flash guns distracting Henri Paul, and the poor man being distracted and driving into a pillar and killing everybody, including himself," Gregory said. "But the evidence showed that was not the case."

The investigations cleared all of them.

Dr. Maillez, who could have remained anonymous, known only to investigators, chose to speak.

"I thought it was part of my duty to set the record straight, to say that the paparazzi did not misbehave as soon as I arrived in the tunnel," he said.

Tests showed Paul was three times over the legal limit - mixed with a dangerous cocktail of anti-depressants. When the princess was finally pulled from the wreckage and placed in an ambulance, she suffered a heart attack. Surgeons found her pulmonary vein had been ripped and her heart shunted across her body.

"What happened that night? Look, you have the pursuit by the paparazzi," Dickey said. "You had people trying to execute this plan who were not the right people, one of them drunk. They are all working for Mohammed al Fayed, or related to him. At the end of the day they made very bad decisions, fatal decisions. Was there a conspiracy here? I don't think so."

Two investigations have shown that Diana died at the hands of a speeding, drunk driver and was the victim of bad judgment and foolish circumstances - not the way fairy tales are supposed to end.

Surviving The Battle Of The Sexes