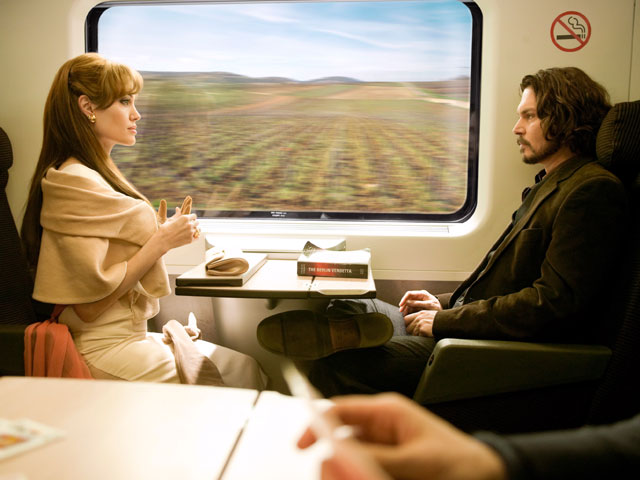 NEW YORK (CBS) Angelina Jolie and Johnny Depp seem like a match made in heaven on paper, but the cat-and-mouse romantic caper "The Tourist" isn't really worth the visit.

Sure, Jolie is as stunning as ever playing Elise, a mysterious, wealthy Englishwoman who obviously has an agenda behind those beguiling eyes, and Johnny Depp is quite the charmer as Frank, an ordinary community college math teacher from the U.S. captivated by her beauty after a chance encounter.

And of course, Venice, where the film is predominantly set, is picture-postcard perfect, but for the most part, that's where the enchantment and the tension in this thriller ends.

Based on the 2005 French thriller "Anthony Zimmer", which is itself scheduled for a reboot next year, second time out director Florian Henckel von Donnersmark ("The Lives of Others") clearly sought to evoke the feel of early Hitchcockian films like "To Catch a Thief." Unfortunately, he failed to achieve it. Full of lush glamour, clever ruses to ferret out the culprit and interjected with a dose of wry humor, Carey Grant and Grace Kelly managed to accomplish in that film what Jolie and Depp fail to master in "The Tourist."

Jolie, jilted by her lover - the unseen Alex Pierce - a wealthy English rogue, seeks to reconnect with him. While at a cafe in Paris she receives a note delivered from him, asking her to board a train from Paris going to Venice and to seek out the first man she sees that has a similar build to him (Depp) and to use him as a decoy to throw the authorities of his trail.

A quasi-romance develops between Jolie and Depp's characters, which seems to fizzle even before it has a chance to sizzle. A barrage of cat and mouse chases ensue, with Frank trying to escape the thugs that mistakenly believe him to be the elusive Pierce in order to recover the king's ransom he stole from them.

Adding to the fray is lead detective Acheson of Scotland Yard (Paul Bettany) who is obsessed with bringing in Pierce at any cost. If it sounds confusing, that's because at times it is and a twist that comes at the end makes a lot of what comes before it become seemingly inconsequential. Never a good thing.

Still, Jolie presumably delivered what was asked of her in the movie - to be silent for a good part in order to maintain her character's mysteriousness quality and, of course, to exude the alluring charm and beauty she has become synonymous with. But in the process, there is very little in the way of chemistry between her character and Depp's. The pairing was a poor one, exacerbated by the director's unwillingness to invest in developing their chemistry, resulting in disconnect between the two of them.

Depp had more to work with and had some strong moments portraying an innocent American caught up in a web of international intrigue. He had little trouble endearing himself to the audience and found moments of humor to inject into his character. Both actors, however, are in their element as solo performers rather than a duo. Jolie hit it out of the park with her last movie "Salt", where she was clearly in charge, and Depp has found his element in films like "Sweeney Todd" and the "Pirates of the Caribbean" franchise.

Despite the lack of "oomph" in the plot, however, the scenery remains breathtaking, Venice is almost as beautiful as the porcelain good looks of Angelina Jolie and the charisma of Johnny Depp. If nothing else, the film may make you consider a holiday in Europe some day.