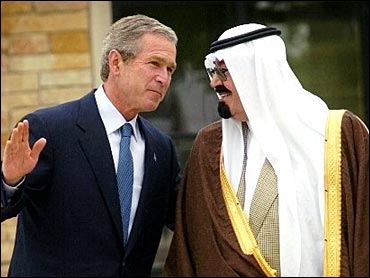 
Ever since 15 of the 19 Sept. 11 hijackers were shown to be Saudi Arabians, the U.S. policy toward the world's predominant source of oil has been under scrutiny. For the first time, many Americans became aware that the Saudi Arabian government at minimum, ignored extremism, or at maximum, bred it.

[CBS News and Simon & Schuster, the publisher of Woodward's book, are both owned by Viacom.]

Woodward charges that President Bush decided to invade Iraq by Jan. 11, 2003 (the White House says it was March). He argues that on Jan. 11, Saudi Arabia's ambassador to Washington was informed of the war plan before the president told Secretary of State Colin Powell.

Woodward also charges that the Saudi ambassador, Prince Bandar bin Sultan, pledged to increase oil production in order to lower gasoline prices so that the economy would improve in time for the presidential election.

Speaking to reporters on Tuesday, Powell denied the accusations.

"First, the suggestion that a plan was presented to Prince Bandar that I was not familiar with is just flat wrong," said Powell, adding that the plan was not a final decision and that he was "aware" Bandar was being briefed because the Iraqi war would have a "military question" for Saudi Arabia as well "a political dimension."

On CNN's Larry King Live Monday night, Bandar phoned into an interview with Woodward and refuted some of the charges. He said that "both Vice President Cheney and Secretary Rumsfeld" told him "the president has not made a decision yet, but here is the plan," adding that the rest of Woodward's depiction is "accurate."

Woodward responded, quoting Rumsfeld and Cheney as telling Bandar that he could "take this to the bank, it's going to happen," and that "when this starts, Saddam is toast." Bandar said that was correct, yet he emphasized the "when."

The Saudi ambassador added that "we hoped that oil prices would stay low" for President Bush but that it was "nothing unusual" because "I can go back to 1979, President Carter asked us to keep the prices down to avoid the malaise."

The U.S.-Saudi relationship dates back to when President Franklin D. Roosevelt met with the founder of the modern Saudi state, King Abdulaziz ibn Saud, in 1945 aboard a ship in the Suez Canal.

The Americans offered security and the Saudis offered oil. Neither country has been perfectly happy since. But the reality of foreign relations is that policy is often based on the best of bad options. Presidents since F.D.R., have seen this agreement as just that.

The relationship peaked under the presidency of George H.W. Bush. This is both due to personal and financial ties, but moreover because the Saudi royal family supported (was even grateful) for the first Iraqi war, when the United States ousted Iraqi troops from Kuwait.

Both then-president Bush and the current president have had personal and deep financial ties with the Saudi royal family. Author and journalist Craig Unger documents $1.4 billion that has "made its way" from the Saudi royal family to "entities tied" to the Bush family, according to Unger's controversial book "House of Bush, House of Saud."

Unger contends that the documented oil holdings and affiliations of both Bush presidents has led to a policy of inaction in the post-Sept. 11 world.

"There is a fundamental piece of logic missing in the American conversation ... the Saudis played a big role in terrorism, that the Bushes have very, very close to the Saudis both in business terms, personal terms, and in public policy. And it has a resulted in a non-cracking down in the Saudi role on terror," said Unger, who lives only blocks from where the World Trade Center once stood.

"They have turned a blind eye to the Saudi role," he added, speaking from Houston, where he is currently on a book tour.

This is where Unger's accusations are greeted with skepticism. For experts, connection does not prove corruption.

Jonathan D. Tepperman, senior editor at the policy journal Foreign Affairs, argues that Unger's book "has done a really good job" showing "a lot of smoke but what he hasn't done is shown me there is any fire."

Tepperman wrote a critical review of Unger's book in The New York Times Book Review. In an interview, Tepperman agreed with Unger that "these connections" (such as President Bush hosting Bandar at his Crawford ranch, an honor usually reserved for heads of state) do "look bad." But he adds "what I don't see is any evidence that the Bush family ever let their personal financial concerns dictate U.S. policy."

"The fact of the matter is that the Saudi royals are deeply unpleasant people and frankly they are not great allies for Washington to have. The problem is they are less bad then all the other alternatives," said Tepperman, echoing a conclusion Unger comes to in his book. "The really good point that Unger makes -- and should be emphasized -- is that this administration is remarkably unconcerned with the appearance of impropriety."

Saudi Arabian expert F. Gregory Gause, of the University of Vermont, agrees with Tepperman that the U.S. support of the Saudi royal family is currently the best of bad options.

"The answer is not democratizing," he emphasizes. But Gause adds he sees a Bush administration and a Saudi royal family that is currently confronting the Islamic extremists although not necessary the puritanical Islamic ideology of Wahhabism.

"The whole bin Laden thing, Islamic extremism, jihadism, blow up buildings and attack America -- only part of that is the narrow focus of Wahhabism," he said.

Wahhabism is the only ideology taught in Saudi Arabia. It traces its roots to Muhammad ibn Abd al-Wahhab, an 18th century Islamic fundamentalist cleric.

"I just got back from Saudi Arabia and my reading is a little bit the opposite of Woodward's. The Saudis are not going to do anything to encourage the reelection of the president," said Jean Francois Seznec, a Columbia University expert on Saudi Arabia. "The relationship between the U.S. and Saudi Arabia could not be worse."

Seznec cites three factors contributing to the scuttling of ties: