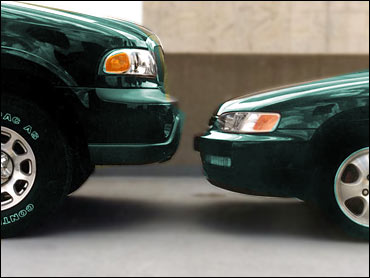 The government says SUVs are too dangerous and pollute too much and it wants to increase tax breaks to buy them. In his latest Against the Grain commentary, CBSNews.com's Dick Meyer says that's nuts.

SUVs are tearing this nation apart.

The line between SUV-haters and SUV-lovers is as clear as the Mason-Dixon line. A culture war is being waged. The gap between the two camps is widening. Violence between the abolitionists and the SUV-holders is escalating. The prospect for a peaceful settlement, alas, is dim.

No one is neutral in this house divided, including me. I'm an abolitionist. But I freely admit that my side in the cause has employed the most extreme, bizarre and deeply ludicrous tactics. Until now.

It's hard to imagine any position nuttier than the "What Would Jesus Drive" campaign being waged by a couple of church groups. But Arianna Huffington – a combination of Zsa Zsa Gabor and Al Sharpton – has met the challenge with an advertising program that accuses SUV-drivers of aiding and abetting terrorists.

Now the Federals are fighting dumb with dumber.

The Bush administration has proposed tripling a little-know tax deduction that dermatologists, real estate agents, accountants or business consultants can use to buy the biggest SUVs.

It's a highly stimulating provision in the administration's economic stimulus program. The loophole would allow someone who buys an $102,581 Hummer H1 for "business purposes" to deduct $87,135 from his taxes immediately. Seriously. Good deal if you can get it.

In December, The Detroit News first reported that lots of self-employed dentists and lawyers were gettin' it. The auto industry's hometown paper also was the first to figure out that the new Bush plan would turn the SUV loophole into a four-car garage in the tax code.

"Oh, you've got to be kidding," said Skip Barnett, a Hummer dealer in Atlanta when the News told him about the Bush tax plan's new SUV subsidy. "That would make a Hummer practically free." Bingo.

In case you were wondering, a businessman who wants to stimulate the economy by buying a Ford Taurus or a BMW convertible can't get these big tax breaks.

That's because in the 1980s, Congress put limits on how much small businesses and the self-employed could write-off for fancy cars. But they exempted vehicles that weighed more than 6,000 pounds because they didn't want to discourage farmers and builders from buying pickup trucks and big vans. SUVs weren't yet popular with soccer moms and football dads.

So now a chiropractor in Sausalito can buy a top of the line Hummer for that $102,581 and then claim a $75,000 deduction for capital equipment, an $8,274 post-Sep. 11 bonus capital equipment deduction and a first-year depreciation allowance of $3,861. The total deduction: $87,135. Assuming the driver is in the top income bracket, the federal tax savings for buying a Hummer is $33,634.

Bet you feel like a sucker for missing out, don't you?

The Bush administration certainly thinks we're suckers when it comes to SUVs.

As the administration's right-hand writes big deductions for big vehicles into the tax code, the administration's left-hand is grasping to make these road monsters safer. The country's top road safety regulator, Dr. Jeffrey Runge, head of the National Highway Traffic Safety Administration recently told an auto industry group, "The fatality rate per 100,000 registered SUVs is about three times higher than it is for passenger cars. It doesn't take a statistician to tell you something is wrong here."

Runge also said that he wouldn't let his family ride in rollover prone SUVs "if they were the last vehicles on earth." That really sent Detroit into a tailspin.

The "Bush Buy SUVs" program also collides with the administration's recent decision to force car companies to improve the fuel economy of SUVs, pickups and minivans by 7 percent over the next few years.

The bottom line is absurd: the government wants to increase its subsidy for buying vehicles it says are unsafe, gas-guzzling polluters.

That makes about as much sense as asking "What Would Jesus Drive?"