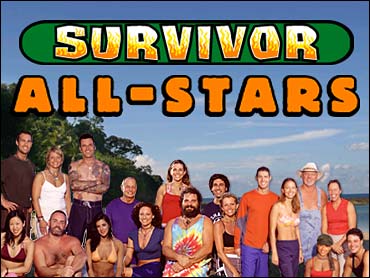 Take 16 strangers, 39 days, and a million dollars and you have the recipe for a TV revolution.

According to a report by CBS News Correspondent Susan McGinnis, in August of 2000, "Survivor" was the most-watched show since the Super Bowl.

Who knew? Not even the torch-snuffer himself.

"Survivor" host, Jeff Probst says, "If you'd have told me four years of 'Survivor' I would have bet my house, which I didn't own at the time, that we wouldn't be doing it this long."

Since "Survivor" debuted in the summer of 2000, reality's become a TV staple with a continuous stream of shows being launched each season.

And with increased competition from every network, "Survivor" isn't just surviving, it's thriving. The recent Pearl Islands' finale drew over 25 million viewers.

Probst says, "The biggest question is why is the show still on, and why do people like it? Who really knows? It definitely helps being first, that we were first, that we grabbed people."

Having contestants eat live bugs certainly grabbed people, but looks kind of tame today. While some challenges had left viewers wincing, the show's locales have made us wonder.

"Unlike any other backstage pass, the press has traveled the world to cover 'Survivor'. And after eight seasons, we're still here," says CBS News Correspondent Tracy Smith from beautiful Pearl Islands.

Probst has certainly become very popular, but so have several of the show's past contestants.

Keith Famie has been cooking on the Food Network, while Neleh Dennis and Sean Keniff have become local TV personalities.

And you may have seen Colby Donaldson recently pitching razors.

Of course not every "Survivor" was able to extend the 15 minutes of fame and not every season was a winner.

"Survivor" winner Richard Hatch says, "There were a couple of seasons where I thought the show was getting a little dry: hint, hint Africa! You know it was so dry, literally, that the players were depleted. But I think they've found their niche and fixed that. And boy, I think it's doing well."

Ben Pappas says, "I think the buzz is back." He covers reality TV for US Weekly, which has dedicated numerous covers to "Survivor". Smith first met Pappas on location for "Survivor: Africa," when they both got a taste of a food challenge that involved drinking blood from a live cow.

Asked if he really thought back when he was drinking blood in Africa that he would be sitting on location for "Survivor" 8, Pappas says, "Jeff Probst and I have this conversation for every "Survivor," except, well, not recently because it's just here to stay.

"I think it's really in the casting. I think people love to tune in. You know, of course, exotic locations are great, the challenges come and go, but it's really the people that we remember and because the people are so fascinating, that's what makes it great," Pappas says.

And now, 18 of those people are back. And the show's creator is already predicting a hit.

Mark Burnett says, "A great blockbuster movie is when you have a great concept, well-shot, and huge stars. Marquee stars. These are our marquee stars. "Survivor: All-Stars" will be a blockbuster."

Hatch asks, "Is there such a thing as an all-stars' all-star? How long can "Survivor" go on?" His guess is, "It can go on pretty long. It still got more viewers than "Friends." And it's that real television that people get to look at and say, 'Hey, would I have decided that? Would I do this?' And they love that. It's good TV."