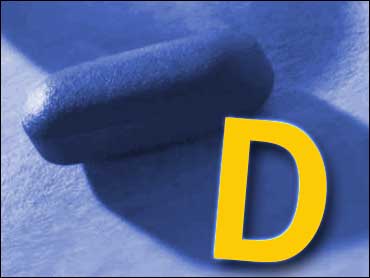 Many of us don't get enough Vitamin D. But experts say it's important that we do.

The Early Show medical correspondent Dr. Emily Senay explained on Monday to why the vitamin is important for the body and how you can get more of it.

Many of us don't get enough Vitamin D. But experts say it's important that we do.

Senay says you can get vitamin D from certain foods or through direct exposure to sunlight.

Vitamin D is a vital nutrient because it helps the body absorb calcium, which is important for healthy teeth and bones. There is some evidence to suggest that more people are becoming vitamin D-deficient.

And not having enough of it in your system may lead to medical conditions such as:

While the results are not conclusive, the National Institutes of Health is so worried about people not getting enough vitamin D that it organized a conference last fall to talk about ways that people can get more of it. In fact, there are some scientists who think people should get more vitamin D than current guidelines suggest.

There is also evidence that children and the elderly are more at risk.

Doctors have seen more cases lately of rickets, a bone disorder you don't hear much about anymore, but was much more prevalent at the turn of the last century.

What doctors don't know, notes Senay, is if Vitamin D deficiencies are becoming more common because people are getting less sun, or it's been a problem for a long time that people are just becoming more aware of.

Studies have shown that you can get all the vitamin D that you need through ten to 15 minutes of direct exposure to the sun about three times a week, Senay points out.

But this is very controversial because too much direct exposure to the sun can lead to skin cancer. So if you are someone who is at a high risk of developing skin cancer, such as person with a fair complexion, you'll want to get your vitamin D in other ways.

And, if you do decide to get it through sunlight, consider doing it in the early morning or the late afternoon. The sun is not as strong at those times of day, but it's still strong enough to get your body to produce all the vitamin D that you will need. Still, remember it's very important to protect yourself from the sun.

Senay says other sources of vitamin D are:

Most milk is fortified with vitamin D. The government started adding it to milk in the 1930's as a way of combating rickets. Fatty fish, such as salmon and sardines, also contains lots of vitamin D. And you can always get it through multivitamins or vitamin D pills.

Senay says a blood test can tell you if you have enough vitamin D in your system. There are no current guidelines about getting tested. But if you feel that you may be at risk, you'll want to ask your doctor to test you at your next physical.