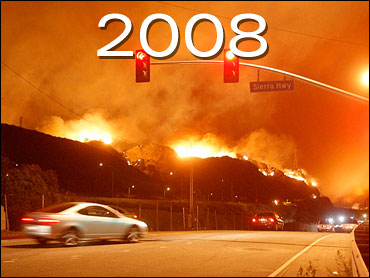 From the presidential election that culminated with a historic victory for Barack Obama to the economy increasing unemployment, foreclosures and the bankruptcy of major corporations, CBS Radio News looks back at the top headlines from 2008.
Before Barack Obama becomes our nation's 44th president, CBS News' Dan Raviv takes a look back at the historic events that shaped Campaign '08.
"Bailout" became the biggest buzz word of 2008, concluding with the honor of being Merriam-Webster's Word Of The Year. CBS News' Peter Maer explains the bailout and its impact on the economy.
In November alone, U.S. employers cut over 500,000 jobs. CBS News' Frank Settipani examines how the failing economy resulted in the highest unemployment surge in 34 years.

Millions of Americans felt pain at the pump in 2008, but that pain turned into much needed relief by year's end. CBS News' Steve Kathan reports.
Is a man's home really his castle? That wasn't the case in 2008 as many homeowners faced foreclosure and skyrocketing mortgage rates. CBS News' Nick Young has more on this year's housing crisis.

In between the 2008 Hurricane Season, the U.S. Gulf Coast was devastated by two powerful storms and the aftermath continues. CBS News' Peter King has more.

Mother Nature kept busy in 2008. CBS News' Cami McCormick takes a look at the damage caused by fires, floods, and tornadoes.
Over 10,000 athletes competed in the Beijing Olympics in what became one of the most expensive, controversial, and spectacular events of 2008. CBS News' Steve Futterman covered the games.
Barack Obama promises to end the war in Iraq once he's in the White House and strengthen military forces in Afghanistan. CBS News' Cami McCormick reports on the year's impact on those two wars.
The Yearning for Zion ranch is home to members of the controversial Fundamentalist Church of Jesus Christ of Latter Day Saints and garnered much attention in 2008. CBS News' Steve Futterman reports.
Many natural disasters happened outside of the U.S. and CBS News' Vicki Barker reports on the massive destruction and devastation they caused.
Many headlines from around the world were felt here in the U.S. CBS News' Vicki Barker has more on the news abroad that impacted 2008.
Guns rights and lethal injection were among the controversial issues tackled by the Supreme Court this year. CBS News' Barry Bagnato has more on the important rulings of 2008.

2008 saw the invention of many innovative gadgets and gizmos. CBS News' Jim Chenevey takes a look at some of the year's biggest technological advancements.

Several reports were released in 2008 showing the ineffectiveness of many popular prescription and over-the-counter drugs. CBS News' Barry Bagnato has more on the year's top health and medical stories.
From the booming baritone of Charleston Heston to "The Originator," Bo Diddley, CBS News' Harley Carnes remembers the icons and legends we lost in 2008.
They graced the covers of magazines, were buzzed about all over the Internet and made headlines from coast to coast. CBS News' Bill Whitney has more on the people who fascinated us in 2008.
There were many words and phrases that entered the lexicon in 2008. CBS News' Nick Young takes a look at what everyone was saying.