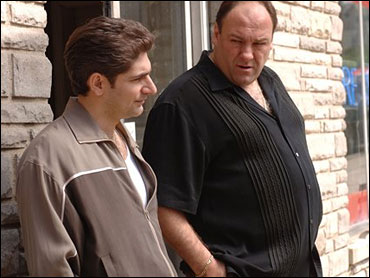 On the premiere of "The Sopranos" eight long years ago, Tony was asked by his psychiatrist, Dr. Melfi, if he had any qualms about how he made his living.

"I find I have to be the sad clown," he wistfully told her — "laughing on the outside, crying on the inside."

Then he added, "Things are trending downward." By that, he meant mob business. But even without meaning to, he had foreshadowed his own fate and that of everybody close to him.

The series that was set in motion 86 episodes ago concludes Sunday at 9 p.m. EDT on HBO, almost certainly with Tony hitting bottom in some tragic way. Just as likely, it will certify the series' bleak theme — life as a lost cause.

This season began with Tony glumly observing his 47th birthday as he fretted about his mortality.

But the all-is-lost message was delivered to the viewer even more forcefully when Dr. Melfi called a halt to Tony's therapy. She decided it was a bad idea to be counseling a sociopath, even one who suffers from depression and anxiety attacks. Blindsiding Tony on last week's episode, she washed her hands of him.

Dr. Melfi had been Tony's best chance for some measure of salvation. By dumping Tony as a client, she seemed to be sealing the damnation that Tony has brought on himself.

Any "Sopranos" fan had to be alarmed by this jarring setup for the end. Through the years, Tony has reigned as a hero, all the more so for his sins and contradictions. Played, of course, by series star James Gandolfini, he was a middle-class guy whose basic concerns about family and work were things any viewer could relate to.

And whatever the scale of Tony's misdeeds, there were other characters around far less likable, who acted even worse. The audience's loyalties remained with Tony. He always got a pass, if only by default.

That is, until this season.

Tony's repellent behavior began in the season premiere when he goaded Bobby, his heir apparent and brother-in-law, into a drunken brawl at his birthday celebration.

Far more off-putting: He murdered his once-beloved nephew Christopher a few weeks ago for being a screw-up.

No wonder viewers have been holding Tony — a guy they used to faithfully embrace — at arm's length.

"I'm a good guy, basically," Tony said to Dr. Melfi in a recent episode. "I love my family. There's a balance, there's a ying and a yang."

As Tony's absurd self-appraisal recalls, "The Sopranos" was brilliant at its own "ying" (in Tony-speak) and yang, its balancing of wry comic flourishes with stark drama and gut-wrenching violence.

But the balance has been shifting. "The Sopranos," which used to have more fun with its characters, has been trending darker and darker.

"I'm getting the feeling that I came in at the end," Tony told Dr. Melfi on the series' premiere. By that, he meant mob business.

Things have only gotten worse. In the post-9/11 era (as "The Sopranos" envisions it), the American Dream no longer applies. Getting ahead is no longer an option. Survival is the issue.

Meanwhile, what Tony describes as his "rotten putrid gene" of depression has apparently been passed to his teenage son. Always a whiny malcontent, A.J. has now become a bona fide nihilist, harping on the threat of global terrorism and the futility of life.

Maybe A.J. has emerged as the mouthpiece for "Sopranos" mastermind David Chase, whose viewpoint is somewhat less than rosy. In any case, Chase has struck a nihilistic tone as the series nears its final hour.

Last week's episode left the Soprano family on the run, after Tony's pre-emptive strike against Leotardo was bungled by gunmen who knocked off an innocent look-alike instead. Tony, on his own, was last seen holed up in a mob safe house, cradling the automatic weapon Bobby gave him for his birthday.

Just 61 minutes from sealing the deal as TV's best drama ever, "The Sopranos" has given the audience fair warning: Expect no redemption for Tony Soprano. No last-minute rescue. No tears.

Barring a miracle, Tony is a lost cause. Sort of like the world that's playing host to his downfall.