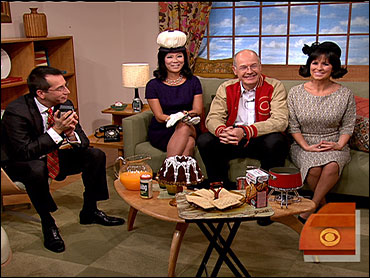 Change was fast, furious and seemingly non-stop in the 1960s, a decade marked by historic figures and events whose whole was somehow even greater than the sum of its iconic parts.

JFK; Dr. Martin Luther King Jr.; RFK; the assassinations of all three; Cassius Clay/Muhammad Ali; Vietnam; massive anti-war protests; the Cold War; a man on the moon; the Civil Rights Act; riots; women's rights; the pill; Woodstock; The Beatles; bell-bottoms; the Twist, and so much more, combined to blur lines and challenge assumptions.

The Early Show remembered the era Tuesday as part of its series, "Five Days, Five Decades."

"I remember," said co-anchor Julie Chen, "my mom coming to this country in 1961. And her family gave her just enough emergency money in case war was going to break out with Russia."

"I was in Miss Smith's music class at Memorial Junior High School, on Ridge Road, in Lansing, Ill. ... and she told us that the president had been shot," Harry Smith recalled about the day John Kennedy was assassinated.

"We had a recording a home of (Dr. Martin Luther King's) 'I Have a Dream' speech," says Mitchell. "And every once in a while, my father would put it on. ... I remember the day that Martin Luther King was shot. I was at home. It was the second time I saw my mother cry."

"There's a famous quote from the '60s," Rodriguez added. " 'If you can remember anything about the '60s, then you weren't really there.' "

Another memory for Price? "We had a man on the moon. ... People just glued to their television sets, watching it all happen. Imagine watching it ... from space!."

To watch our report summing up the '60s,

The Early Show also looked at the music, cars, fashions, and some of the most memorable

TV commercials
of the day, not to mention some of TV's biggest
leading ladies
of that time, speaking with Barbara "I Dream of Jeannie" Eden, Dawn "Gilligan's Island" Wells, Barbara "Get Smart" Feldon and Kathy (Cissy of "Family Affair") Garver.

And, a special treat -- The Four Tops performed on the show.