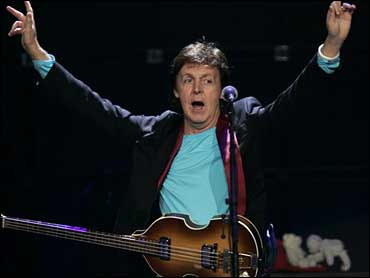 Some of the music industry's heaviest hitters — Bruce Springsteen, The Police, Paul McCartney and even June Carter Cash — are making appearances this week. Some highly anticipated movies such as "Oceans 13" are coming to theaters as well.

"12:08 East of Bucharest" is a Romanian comedy about different people's recollections of the fall of Nicolai Ceausescu. It opens June 6.

"Your Mommy Kills Animals" is an examination of the animal rights movement in light of the FBI's recent declaration that animal rights activists are the biggest domestic terror threat in the United States. The movie features appearances by Katherine Heigl, Jessica Biel, Betty White and Ben Stein.

"Surf's Up" is another animated penguin movie about a little penguin whose goal is to win the annual Penguin World Surfing Championship. Vocal talents include Shia LaBeouf, Zooey Deschanel and Jeff Bridges.

"Jersey Beat," features the greatest hits of Frankie Valli and the four seasons, including "Big Girls Don't Cry," "Walk Like a Man" and "Ain't That a Shame."

Former Beatle Paul McCartney looks back with his new album "Memory Almost Full," which features new songs like "Dance Tonight," "That Was Me" and "Nod Your Head."

Another music legend is out with a new album. Bruce Springsteen's "Live in Dublin" features old favorites like "Atlantic City" and "Blinded by the Light" as well as "O Mary Don't You Weep," off "We Shall Overcome: The Seeger Sessions."

Photos: Born In The USA

The legendary trio the Police are releasing a 2 disc set, "The Police," of their classics including "Roxanne," "Can't Stand Losing You," and "Message in a Bottle."


"Anchored in Love: A Tribute to June Carter Cash" features some of her greatest songs, such as "If I Were a Carpenter," sung by Willie Nelson and Sheryl Crow, and "Wildwood Flower," sung by Loretta Lynn.

The new animated series "Creature Comforts," presents the voice of the people from the mouths of hilarious animated animals. The series, "featuring the voices of your fellow Americans," is based on an Oscar-winning short film that also spawned a hit series on British TV. It is produced by Aardman Animations, which made the feature films "Wallace & Gromit: The Curse of The Were-Rabbit" and "Chicken Run." "Creature Comforts" premieres on CBS Monday at 8 p.m. ET.

Kirstie Alley stars in the comedy "Write & Wrong" as an award-winning screenwriter too old to land work. She plays Byrdie Langdon, who, nearing 50, is considered over the hill in youth-centric Hollywood.

In desperation, Byrdie persuades Jason, her handsome young nephew and a car salesman by trade, to pose as a screenwriter using her scripts. The ploy succeeds — until Jason falls for Andrea, the studio development executive.

"Inside the Green Berets" tells the story of a group of elite soldiers in a remote outpost in south-central Afghanistan known as Fire Base Cobra. Located in hotly contested territory still largely under Taliban control. The film is narrated by producer-director Steven Hoggard. The film airs Sunday at 9 p.m. on the National Geographic Channel.

Monday at 9 p.m., the National Geographic Channel airs "Inside the Taliban," which takes viewers into the world of the Taliban, from their roots in the Cold War era (when the Soviet Union invaded Afghanistan and America secretly supported these Afghan warriors) to their emergence as a deadly force now aggressively mounting an effort to retake control of Afghanistan.

"Lean Mean Thirteen" by Janet Evanovich is the 13th installment of the Stephanie Plum novels about the adventures of a female bounty hunter from New Jersey.

Atonement author Ian McEwan has a new book, "On Chesil Beach". His 13th work of fiction is somewhere between a novel and novella and explores issues of sex and class.

"A Woman in Charge: The Life of Hillary Rodham Clinton" by Watergate reporter Carl Bernstein tackles everything from Clinton's girlhood in Illinois to her shift from the Republican to Democratic parties in college. He examines the way she reacted to the Monica Lewinsky scandal and how it helped her win a Senate seat.

"Seinfeld: The Complete Eighth Season" is out on DVD so the show's legions of fans can watch some more reruns.

"Norbit" is out, for those who want to see Eddie Murphy dressed up in a fat suit to portray a 400-pound woman.

The classic sitcom from the '80s, the "Cosby Show" now has it's third and fourth seasons out on DVD.

If you don't pick up the album, or just want to see as well as hear "the Boss," "Bruce Springsteen: Live in Dublin" is also out on DVD.