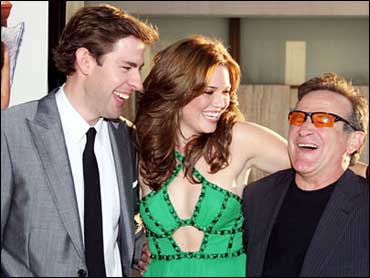 This is an exciting week for Sci-Fi lovers: not only is the "Transformers" movie out, but "Doctor Who" returns to the Sci Fi Channel. There's also some fun family comedy with the new movie "Introducing the Dwights" and the DVD "Driving Lessons."

"Transformers:" On the Fourth of July, Earth becomes the battleground for robots from outer space. It's up to Sam Witwicky, played by Shia LaBeouf, to save the world.

"License to Wed" stars John Krasinski and Mandy Moore as an engaged couple going through pre-marriage boot camp with an eccentric minister - Reverend Frank, played by Robin Williams. He won't bless their union until they pass his outrageous tests.

"Rescue Dawn stars Christian Bale as Dieter Dengler, a fighter pilot who was taken prisoner during the Vietnam war but managed to break out of his camp. The film is directed by Werner Herzog.

"Introducing the Dwights" is a comedy about a stand-up comedienne mom who tries to stop her son from growing up and falling in love. The son, Tim, has to learn how to balance his zany mother with the new girl in his life.

"Joshua" is the story of a wealthy New York City family. The father works on Wall Street and the mother stays at home to take care of her infant daughter and the young piano prodigy, Joshua. With the birth of the girl, the family dynamic shifts, making room for something that could be sinister to emerge.

The PBS documentary series "Wide Angle" comes back for a sixth season and looks at China's judicial system with "The People's Court". The documentary asks if it is possible to get a fair trial there. With Daljit Dhaliwal back as host, "Wide Angle" airs Tuesday at 9 p.m. ET on PBS.

Photos: Sparks Fly On The Fourth

The Sci Fi channel's third season of "Doctor Who" begins Friday at 8 p.m. with a special, "The Runaway Bride," in which the Doctor meets a mysterious woman in a wedding gown. Then at 9:30 p.m., medical student Martha Jones is startled to find her entire hospital transported to the moon, where fearsome beasts (and the Doctor) await.

"DinoSapien" is a new scripted kids' series that imagines a modern world where dinosaurs cohabit with humans. It premieres at 1 p.m. Saturday on Discovery Kids Channel.

Those who want to rock should check out "Libertad", the new album by Velvet Revolver. The band is made up of old members of Guns 'n' Roses like guitarist Slash and Stone Temple Pilots' troubled vocalist Scott Weiland.

"Ms. Kelly" is the sophomore album from former Destiny's Child member Kelly Rowland. Her debut single "Like This" is made for dancing in the club. The album features guest appearances from Eve and Snoop Dogg

It's been a good year for female singer/songwriters and with "Little Voice" featuring "Love Song" and "Gravity," Sara Bareilles is ready to join the ranks of Regina Spektor and Lilly Allen.

"The Quickie" by James Patterson and Michael Ledwidge is the story of NYPD cop Lauren Stillwell, who spots her husband leaving a hotel with another woman. She plans revenge but lands in a horrible situation. Meanwhile, she is given an assignment at work that makes her confront her own morality.

"Slummy Mummy: The Secret Life of Lucy Sweeney" by Fiona Neill
is about a stay-at-home mom who has some trouble managing her three sons and bad-tempered husband. Her life is constantly on the brink. Looking for respite, she begins a flirtation with a stay-at-home dad.

"Shadow of the Silk Road" by Colin Thubron traces the passage of trade, armies, religion and innovation that runs through China, Uzbekistan, Kyrgyzstan, Afghanistan, Iran and Turkey.

Remember that strange series from the 1980s when a beautiful woman falls in love with a Beast who lives in the sewers? Well if you are a fan, season two of "Beauty and the Beast" is now on DVD.

"Disappearances" starring actor/songwriter Kris Kristofferson in the adaptation of Howard Frank Mosher's best-selling novel. Prohibition is still in place, Kristofferson, a cattle farmer also smuggles whiskey. He brings his 14-year-old son on a smuggling journey to Canada and they revisit the secrets of their family's past.

"Driving Lessons" starring Julie Walters, Rupert Grint, Nicholas Farrell, and Laura Linney, is the story of a 17-year-old son of a vicar trying to get out from under his mother's control. He begins doing gardening work for an elderly actress who encourages his interest in poetry and girls.

If you're in the mood to laugh, pick up comedian George Lopez's "America's Mexican."