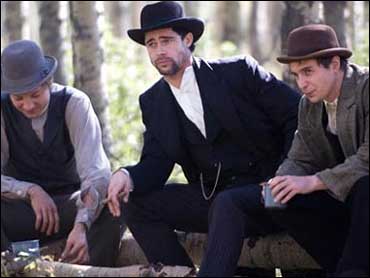 Could this be the year Brad Pitt wins an Oscar? He's already won best actor for his role in "The Assassination of Jesse James by the Coward Robert Ford" at the Venice Film festival. This week, look out for some sophomore albums from James Blunt and KT Tunstall.

"The Assassination of Jesse James by the Coward Robert Ford" stars Brad Pitt as the famous outlaw. He won the award for best actor at the Venice Film Festival. Casey Affleck plays Robert Ford. The movie tried to uncover the real men behind the legend.

"Into the Wild" is based on the bestselling book by Jon Krakauer. It's the true story of Christopher McCandless, played by Emile Hirsh, who left behind all his money and possessions to hitchhike through Alaska's wilderness. The film stars Marcia Gay Harden, William Hurt, Jena Malone, Catherine Keener, Brian Dierker and Vince Vaughn. It is written and directed by Sean Penn.

"Sydney White" starring Amanda Bynes, is a modern day take on "Snow White." Set on a college campus, Sydney White wants to join her late mother's sorority but is thwarted by the evil president. But she finds friendship from seven dorks and a gorgeous frat boy.

"Good Luck Chuck": Charlie Logan, played by comedian Dane Cook, has been cursed since he was a boy. Any woman who sleeps with him will find true love in the next man she meets. But when he meets the girl of his dreams, played by Jessica Alba, he needs to hold off or else he could ruin it with her. Also, she's a huge klutz.

"Seeing in the Dark" is a rhapsodic sight-and-sound odyssey into the night sky. Produced, written and narrated by Timothy Ferris (and based on his book of the same name), the film is meant to lure newcomers into stargazing It airs 8 p.m. Wednesday on PBS.

Premiering 9 p.m. Wednesday "Orozco: Man of Fire" is a portrait of Jose Clemente Orozco, who, after early hardship and toil as a political cartoonist, became a leading force in the Mexican Mural Renaissance.

Then at 10 p.m., there's a repeat of "Rivera in America," the story of painter Diego Rivera, whose bold, visionary images sought to chronicle the history and culture of his native Mexico, as well as celebrate the workers of the world.

D.L. Hughley invades D.C. for his fourth comedy special for HBO. And "D.L. Hughley: Unapologetic," with all-new material taped in front of a live audience in the nation's capital, raises loads of funny issues with no remorse. The hour-long special premieres 10 p.m. Saturday.

"Reba Duets" is country super-star Reba McEntire's collaboration with other singers including Kelly Clarkson. They sing Clarkson's hit "Because of You."

James Blunt is releasing a second album, "All the Lost Souls," after his smash "Back to Bedlam," which featured "You're Beautiful."

Gloria Estefan's new album "90 Millas" talks about the plight of her homeland, Cuba.

Former chairman of the Federal Reserve Alan Greenspan is still one of the most influential people in the world. His new book "The Age of Turbulence: Adventures in a New World" is a memoir of his storied career.

"When You Need a Lift: But Don't Want to Eat Chocolate, Pay a Shrink, or Drink a Bottle of Gin" by Joy Behar is a book about overcoming adversity and features stores from other famous folks like Tom Hanks, Barbara Bush and James Earl Jones.

"We Are Marshall" starring Matthew McConaughey and Matthew Fox is the story of the Marshall University football program that is forced to rebuild after an airliner carrying the team home from a game crashes and kills 75 members of Marshall's football squad and athletic staff.

Photos: 'We Are Marshall'

"Gracie" is based on the true story of Elisabeth Shue's family. Gracie, the character based on Shue, tragically loses her older brother and seeks to follow in his footsteps on the soccer field.

"Lucky You" stars Eric Bana as a professional gambler in Las Vegas who falls for a singer played by Drew Barrymore. He finds himself playing the biggest poker game of his life against his father, played by Robert Duvall.

"100 Saints You Should Know" opens Sept. 18 at the Off Broadway Playwright Horizons. It's the story of a mother who cleans the local parish rectory for extra money but decides to pursue a relationship with the priest after he is forced to leave for mysterious reasons.

"Scarcity" opens Sept. 20 at the Off Broadway, Atlantic Theater Company. The play is set in rural Western Massachusetts and is about two siblings who try to escape poverty.