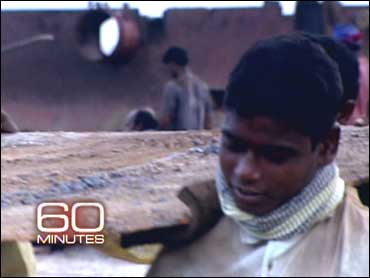 Now and then 60 Minutes take viewers to places they've never been to before. They are exotic places, the stuff of dreams. This is a story about one of those places. But as Bob Simon reports, the ship breaking beaches of Bangladesh belong more in a nightmare.

We all know how ships are born, how majestic vessels are nudged into the ocean with a bottle of champagne. But few of us know how they die. And hundreds of ships meet their death every year. From five-star ocean liners, to grubby freighters, literally dumped with all their steel, their asbestos, their toxins on the beaches of some the poorest countries in the world, countries like Bangladesh.


You can't really believe how bad it is here, until you see it. It could be as close as you'll get to hell on earth, with the smoke, the fumes, and the heat. The men who labor here are the wretched of the earth, doing dirty, dangerous work, for little more than $1 a day.

It's not much of a final resting place, this desolate beach near the city of Chittagong on the Bay of Bengal. Ships are lined up here as at any port, but they'll never leave. Instead, they will be dissected, bolt by bolt, rivet by rivet, every piece of metal destined for the furnaces to be melted down and fashioned into steel rods. The ships don't die easily - they are built to float, not to be ripped apart, spilling toxins, oil and sludge into the surrounding seas.

The men who work here are dwarfed by the ships they are destroying. And they dissect the ships by hand. The most sophisticated technology on the beach is a blowtorch. The men carry metal plates, each weighing more than a ton from the shoreline to waiting trucks, walking in step like pallbearers, or like members of a chain gang. They paint images of where they would like to be on the trucks - pictures of paradise far from this wasteland.

And when night falls, the work continues and the beach becomes an inferno of smoke and flames and filth.

This industry, which employs thousands and supplies Bangladesh with almost all its steel, began with an accident - a cyclone to be precise. In 1965, a violent storm left a giant cargo ship beached on what was then a pristine coastline. It didn't take long before people began ripping the ship apart. They took everything and businessmen took note - perhaps they didn't need a storm to bring ships onto this beach here.

Mohammed Mohsin's family has become extremely wealthy bringing ships onto these beaches. He pays millions of dollars for each ship and makes his profit from the steel he sells. The name of his company is PHP, which stands for Peace, Happiness and Prosperity.

His latest acquisition is a ship weighing in at 4,000 tons but Mohsin tells Simon that's small by comparison to other vessels that have been gutted on the beaches. They have handled ships as large as 68,000 tons.

This the first time Mohsin has seen the 4,000 ton ship close up. In fact buying a ship is not at all like buying a car. He didn't even need to see a picture before he bought it for $14 million. All he needed to know was its weight and how much the owners were charging for each ton of steel.

One of the single most valuable parts of the ship is the propeller. The "small" ships propeller is worth around $35,000 alone, Mohsin estimates.

It may be a small ship to Mohsin, but getting onto it from the beach is still a bit delicate.

Mohsin's ships don't have seafaring captains anymore - he is the captain now of dying ships and the captain of one of the largest of 30 shipyards on this 10-mile stretch of beach. Some 100 ships are ripped apart on the beach each year, most of them from the west.

"It is the west's garbage dump," says Roland Buerk, who lives in Bangladesh. He spent a year in these yards, writing a book about the industry. 60 Minutes hired him to guide Simon through the tangled world of shipbreaking.

To do the same work in America or England would be very expensive.

"It would be because in Europe and America when they do this, they do it in dry docks," Buerk explains. "So in actual fact, the owners of these ships are selling them to the yard owners here to break up. If they had to do it in America, they'd have to pay for that process to be carried out. So you see it makes real economic sense to do it here."

"So old, out-dated ships that were previously a liability, are now an asset," Simon remarks.

"Exactly," Buerk agrees. "And that's why they end up on these shores."

They are the shores of the most densely populated nation and one of the poorest nations in the world. Bangladesh desperately needs steel for construction but has no iron ore mines. The shipbreaking yards are its mines, providing 80 percent of the nation's steel.

But steel is only part of the deal; there are so many things on a ship which are sold off. It is in fact a gigantic recycling operation.

You can find everything, including kitchen sinks, at a sprawling roadside market which goes on for miles. When you're driving down this road, it's not a problem if you need a toilet or a life boat or a light bulb. It is estimated that 97 percent of the ship's contents are recycled. The other three percent, the stuff nobody would buy, including the hazardous waste, asbestos, arsenic and mercury, are left behind to foul the beaches.

"And what we're looking at, which is a recycling operation, is also an environmental disaster," Simon says.

"That's true. And I think this is really capitalism as red in tooth and claw as it gets. At the moment this is what makes financial sense for everybody. And this is, despite the fact that we might not like it, and it doesn't look pretty, this is how it's done," Buerk says.

The workers toil in tough conditions. They have no unions, no safety equipment, and no training. About 50 are said to die in accidents each year; often in explosions set off by blowtorches deep inside the fume-filled holds.

You see casualties in the yards, men who were injured here but have no money to go anywhere else. The workers are housed in barracks with no beds, just steel plates scavenged from the ships they break.

Many of the workers are not old enough to grow a beard. Some are, quite simply, children. 60 Minutes spoke to several who said they were 14 and had been working here for two years.

So what does the man from Peace Happiness and Prosperity say about that?

Asked if there are any children working in his yard, Mohsin says, "Not my yard."

"Well, we talked to several children," Simon tells Mohsin. "We found a couple who were 14 and said they'd been working there for a couple of years."

"They are - if they are working - if they don't work, what they'll do, then? Our government cannot afford it. Their food, shelter and clothing has to be provided by someone whether their parents or the government. None of them can afford it. So what they gonna do?" Mohsin argues.

"So, you say that child labor is inevitable, necessary in Bangladesh?" Simon asks.

"If they don't work in ship-breaking yard, they'll work somewhere else. They have to," Mohsin replies.

But child labor is only one of the issues. Environmentalists have been doing battle with the industry for years. They say the west has no business dumping its toxic waste on impoverished lands in the east. They condemn the appalling work conditions, the low pay, and the lack of accountability for workers who are killed or injured. Their most important proposal: that ships be cleaned of their toxic materials in the west, before they sail to Bangladesh.

That's in line with an international ban which prohibits the shipment of hazardous waste from rich countries to poorer countries.

Rezwana Hasan of the Bangladeshi Environmental Lawyers Association is in the forefront of the battle against the industry. She says the shipbreaking yards in Bangladesh don't respect even the most minimal environmental standards.

But the owners of the yards argue that environmentalism is a luxury, reserved for the rich nations.

"It becomes quite expensive, which we can't afford," Mohsin claims.

"If all the rules and regulations, all the international conventions regarding ship breaking were observed here, would the industry be able to survive?" Simon asks Mohsin,

"No," he replies. "It would be stopped from tomorrow. It'll stop. Has to be stopped."

And that, he says, would put 30,000 men out of work and deprive Bangladesh of its source of steel.

But for now the shipbreaking industry in Bangladesh is sailing full steam ahead. Literally. 60 Minutes boarded a Russian fishing trawler, the Bata, in the final hours of its last voyage.

It was eerie walking through the corridors. The lights were on but nobody was home. It was a dead ship sailing.

In a sailor's cabin, the sheets were on the bed, a radio and a flashlight were on the table. In the kitchen, there were pots filled with borscht and potatoes that were barely cold.

In the dining room there were still Russian books on a table. They too will end up in the market on that dusty road to Chittagong. There was just a skeleton crew on this skeleton ship

Up on the bridge, Captain Edwaard Petenko already seemed dressed up for his coming vacation. He had brought the ship all the way from Vladivostok and didn't enjoy the trip.

"No like. Sometimes even cry. Because…" Capt. Petenko says.

He wasn't even in charge any more. The baton had passed to the beaching captain, Enam Chowdrey. He had done this 700 times. They call him the executioner.

Beaching a ship is a very delicate operation. It's not simply aiming for the beach - Chowdrey has to calculate the movement of the tides, the swell, the wind, by the minute. In this instance, he has got to wedge the ship between two other vessels already parked there.

The workers on ships nearby are cheering. The Bata's arrival means more work, more wages for them. Their backs and their lungs will suffer, but do they have a choice?

The Bata steamed its way into its final resting place. The bow got stuck in the sand. A perfect end to the last voyage. In just a few months, it will disappear.

And Captain Petenko? He'll head home to Vladivostock. But he'll be back in Bangladesh soon. His company has three more trawlers heading to these shipyards.

U.S. Naval and Merchant Marine ships no longer wind up in these yards, not since 1998, when President Clinton passed a moratorium on exporting U.S. ships. Instead, they clog up American waterways. U.S. ship breakers can't keep pace and the Bangladeshis would be only to happy to have their business.
Produced By Michael Gavshon

Nuclear Fusion: Inside the breakthrough that could change our world
Thanks for reading CBS NEWS.
Create your free account or log in
for more features.
View CBS News In
CBS News App Open
Chrome Safari Continue
Be the first to know
Get browser notifications for breaking news, live events, and exclusive reporting.