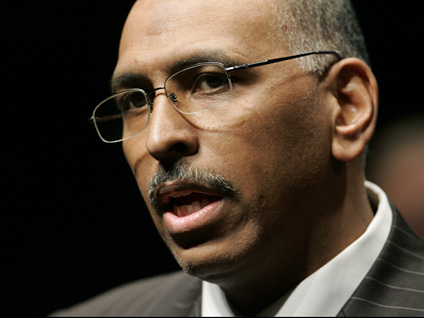 A "shadow government" consisting of 75 or more senior officials has been living and working secretly outside Washington since Sept. 11 in case the nation's capital is crippled by terrorist attack. "This is serious business," President Bush said of plans to ensure the continuity of government.

Such an operation was conceived as a Cold War precaution against nuclear attack during the Eisenhower administration but never used until now. It went into effect in the first hours after the terror attacks and has evolved over time, said senior government officials who provided details of the plan.

Without confirming details of the government-in-waiting, Mr. Bush told reporters in Iowa: "We take the continuity of government issue seriously because our nation was under attack. And I still take the threats we receive from al Qaeda killers and terrorists very seriously."

"I have an obligation as the president and my administration has an obligation to the American people to put measures in place that should somebody be successful in attacking Washington there is an ongoing government," Mr. Bush said. "That is one reason why the vice president was going to undisclosed locations. This is serious business. And we take it seriously."

Under the classified "Continuity of Operations Plan," which was first reported by The Washington Post in its Friday editions, high-ranking officials representing their departments have begun rotating in and out of the assignment at one of two fortified locations along the East Coast.

The Post said the first rotations were made in late October or early November, a fact confirmed by a senior government official late Thursday.

Officials who are activated for the duty live and work underground 24 hours a day, away from their families, according to the Post. The shadow government has sent home most of the first wave of deployed personnel, replacing them most commonly at 90-day intervals.

A government official who spoke to The Associated Press said President Bush does not foresee ever needing to turn over government functions to the secret operation, but believed it was prudent to implement the long-standing plan in light of the war on terrorism and persistent threats of future attacks.

The team, drawn from every Cabinet department and some independent agencies, would seek to prevent the collapse of essential government functions in the event of a disabling blow to Washington, the official said.

The underground government would try to contain disruptions of the nation's food and water supplies, transportation links, energy and telecommunications networks, public health and civil order, the Post reported. Later, it would begin to reconstitute the government.

The government-in-waiting is an extension of a policy that has kept Vice President Dick Cheney in secure, undisclosed locations away from Washington. Cheney has moved in and out of public view as threat levels have fluctuated.

As next in line to power behind Bush, he would need help running the government in a worst-case scenario

"We take this issue extraordinarily seriously, and are committed to doing as thorough a job as possible to ensure the ongoing operations of the federal government," Joseph W. Hagin, White House deputy chief of staff, told the Post, though he declined to discuss details. "In the case of the use of a weapon of mass destruction, the federal government would be able to do its job and continue to provide key services and respond."

According to the Post, the backup government consists generally of officials from top career ranks, from GS-14 and GS-15 to members of the Senior Executive Service. The White House is represented by a "senior-level presence," one official said, but well below such Cabinet-ranked advisers as Chief of Staff Andrew H. Card Jr. and national security adviser Condoleezza Rice.

Many departments, including Justice and Treasury, have completed plans to delegate statutory powers to officials who would not normally exercise them, the Post said. Others do not need to make such legal transfers, or are holding them in reserve.

The report said civilians deployed for the operation are not allowed to take their families and may not tell anyone where they are going or why.

The two sites of the shadow government make use of local geological features to render them highly secure, the Post said. They are well stocked with food, water, medicine and other consumable supplies, and are capable of generating their own power.