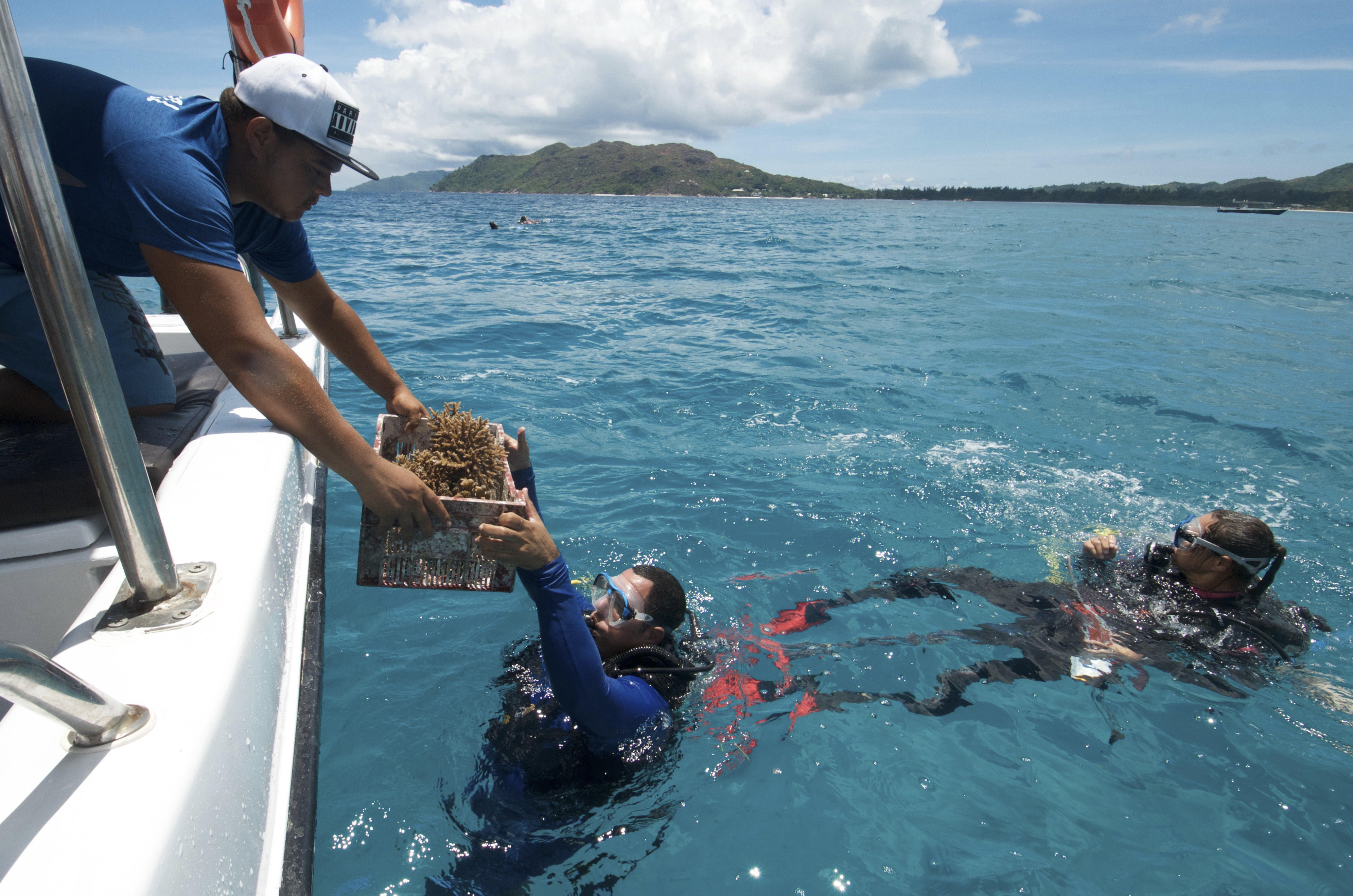 BEAU VALLON, Seychelles -- Beneath the crystal-clear waters of the Indian Ocean island nation of the Seychelles, a fight is growing to save the coral reefs that shelter a range of creatures -- from tiny invertebrates to the sprawling octopus -- from climate change. The fragile reefs act both as a protective barrier for coastlines and an attraction for the tourists who keep the country's economy going. But the reefs are also one of the first victims of rising ocean temperatures.

The Seychelles in some areas lost up to 90 percent of its coral reefs in 1998 in an environmental event known as bleaching, where coral in warming waters expel the colorful algae that live within their skeletons and, without their nutrients, starve. Another bleaching event occurred in 2016 after the reefs had partly recovered, said David Rowat, chairman of the Marine Conservation Society Seychelles.

With further threats including overfishing and pollution, coral reefs around the world will reach their tipping point before the end of the century, disappearing more quickly than they can restore themselves, according to a study published in the journal Science last month.

The Seychelles government this year announced a pioneering deal where it swapped part of its sovereign debt for investment in marine protection areas.

Already, conservationists have launched a number of coral reef restoration projects around the nation's 115 islands. In one, more than 50,000 coral fragments have been nurtured and transplanted by a local charity, Nature Seychelles, in what the organization calls the world's largest coral restoration program.

The Marine Conservation Society has both land- and ocean-based coral nursery sites.

On a recent afternoon, an employee at one site in Beau Vallon painstakingly cleaned a nursery tank with a toothbrush. She and project leader Chloe Pozas spent the morning transferring tiny coral fragments, once collected from the sea floor, from the tanks to an underwater "rope nursery," or improvised skeleton.

"When the corals are going to reach a suitable size, when they are big enough, they are going to be outplanted back on the reef," Pozas said.

About 2,800 kilometers -- 1,700 miles -- away off the island of Curieuse, the Seychelles National Park Authority has been moving corals grown in another rope nursery.

Divers delicately transfer the tiny corals to a degraded reef in a national marine park, then attach them using non-toxic epoxy resin.

After the 2016 bleaching event, experts noticed that some corals were more resilient than others. Those "super corals" were chosen for regrowth and transplanting.

"Restoration is really only a tool to try to help the reef to recover faster, especially because coral bleaching is projected to happen annually by 2050," Pozas said.

The Seychelles government is working with Nature Seychelles to secure funding for a proposal to upscale coral farming efforts to a larger operation using new methods. The aim is to commercialize part of the operation so that it can financially sustain reef restoration well into the future, according to Nature Seychelles.

Those whose livelihoods rely on tourism are watching the efforts with interest.

"Obviously we have divers and snorklers and if we can continue to have healthy reefs and lots of fish, we got happy divers, they do lots of dives, the dive center makes more business, the government gets more tax money and everybody is happy," said Glynis Rowat, who has managed one of the oldest diving centers in Beau Vallon for over 30 years.