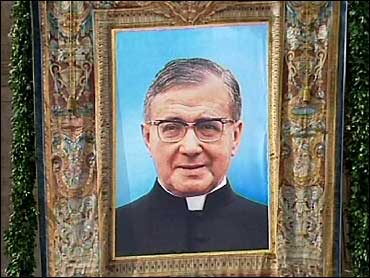 As Roman Catholic cardinals prepare to choose a new pope, one influential group of Catholics is drawing lots of outside attention.

It is the secretive movement called Opus Dei -- Latin for "the work of God" -- which plays a key fictional role in the bestselling thriller "The Da Vinci Code."

At least two of the cardinals who'll pick the next pope are members of Opus Dei and -- from the Spanish cardinal now temporarily in charge to the spokesman for Pope John Paul II -- many more here have close links to the conservative Catholic institution.

"It has had unprecedented power under Pope John Paul II, and there is no way it wants to lose that power in another papacy," says Frances Kissling of the group Catholics for a Free Choice.

With more than 80,000 members worldwide - wealthy and influential in politics and business - Opus Dei has been described by its critics as sinister.

"It is a secretive organization that is not subject to any accountability or control, and organizations like that always have the potential for danger," says Kissling.

In the potboiling bestseller "The Da Vinci Code," there's no doubt Opus Dei's implicated in crime, conspiracy and corporal punishment meant to mimic the suffering of Christ.

Even its followers admit there's some fact in the fiction.

"Anyone who is familiar with Catholic traditions of penance would not at all be surprised by members of Opus Dei using what are known as the cilice and the discipline, a spiked chain and a small whip," says Father John Wauck of Opus Dei.

Wauck insists there's nothing menacing in the group's mission.

But, as one follower put it, it's not "Catholic-lite."

It could be that's contributed to Opus Dei's image problem. An unremarkable-looking building on a Rome street, for instance, could easily inspire the imagination of a writer of fiction.

What word except "hidden" could describe the ornate chapel, built like a vault deep inside.

Asked if the building is the holiest place to Opus Dei, says Opus Dei member Peter Bancroft says: "Oh, no, but this place is certainly special for us because here we have St. Jose Maria under the alter."

That's Opus Dei's founder, preserved in a silver coffin. It is a group with deep interest in who'll be chosen to steer the church at a rare time when influence can count.

Were Idaho students targeted in quadruple murder?
Thanks for reading CBS NEWS.
Create your free account or log in
for more features.
View CBS News In
CBS News App Open
Chrome Safari Continue
Be the first to know
Get browser notifications for breaking news, live events, and exclusive reporting.