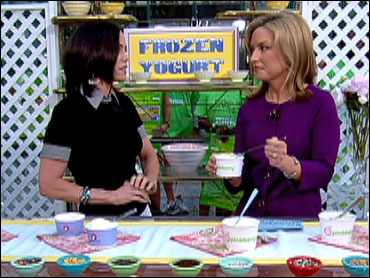 You may have noticed that specialty frozen yogurt stores are opening up around the country.

But what's the real deal on it? Is it as healthy as consumers may want to believe?

"Frozen yogurt is not yogurt frozen," registered dietician Keri Glassman explained on The Early Show Thursday. "So, it's not as healthy as the name suggests. Frozen yogurt usually lower in fat than most ice creams, but it also has lots of added sugar. In order to use the name 'yogurt' in frozen yogurt, it does have to have, the law requires that it have the live active cultures that yogurt does have."

"This sort of led the rage of yogurt in the 80S. What i like about TCBY is it has about 20 percent of your calcium needs in half of a cup. And there are actually seven probiotics in it -- those healthy cultures. However, it still is so easily over-consumed. There is corn syrup added, so there's extra added sugar, and a half-a-cup adds up fast. Most people have at least two-to-three times that, and they're eating it every night after dinner, thinking, 'It's healthy. It's just yogurt.' It needs to be a replacement for a treat."

"It's so popular, so I'm going to have to say it's not as healthy as it is popular. People think, because of their two flavors, the tart plain and the green tea, they're such healthy flavors that, 'Oh, they're just as healthy as eating regular yogurt.' Regular plain yogurt versus the pinkberry is going to have a lot more calcium, a lot more protein, a lot less sugar, and a (many fewer) calories. So, you still need to be really careful when you're eating Pinkberry. It is a treat. It should be a replacement for your ice cream indulgence."