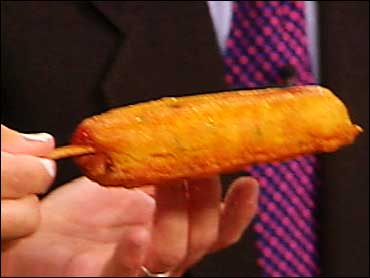 To be a master in the kitchen, Alton Brown says one must first begin to understand the science behind how and why food cook the way they do.

In his book, "I'm Just Here for the Food," Brown unlocks the mystery behind common cooking techniques like frying, which he shows The Early Show by preparing corn dogs.

For close to six seasons, Brown has used his show, "Good Eats" on the Food Network, as a vehicle to wittily entertain and educate viewers on the joy of cooking by delving into the science behind the art. Using history, pop culture and science, Alton elevates the home cooking of his grandparents to another level.

Corn dogs are a food that we know from fall festivals, carnivals and tailgating. It actually got its start when German immigrants moved into Texas. Some of these new German immigrants were sausage-makers by trade, but had a hard time selling their wares in Texas. So, as a ploy, they took sausages, rolled them in a cornbread batter and fried them. The sticks came later.

In order to fry something, one has to add fat. Fat does two things: it works as both a flavoring ingredient and a cooking medium. So anytime you fry a food, you add flavor and texture.

Brown describes some frying techniques on The Early Show:

Brown uses pan-frying to cook a pack of corn dogs. Brown has chosen to use an electric skillet for his heated oil in large part because it's easier to maintain a steadier oil temperature. He says a steady temperature will also keep the oil from burning.

Combine the flour, cornmeal, salt, baking soda, baking powder, and the cayenne pepper. In a separate container, combine the jalapeño, corn, onion, buttermilk, and 1/2 cup water. Pour this wet mixture into the dry ingredients, stirring just to thoroughly combine. Allow the batter to rest for 10 minutes.

Thoroughly pat the franks dry. Dredge the franks in cornstarch, being sure to shake off all the excess, then dip them in the batter. Immediately add to the hot fat. As soon as the batter is set on the bottom side, roll the corn dog over to cook the other side. Turn every minute until the outer skin is mahogany brown and crunchy, about 6 minutes total.

Drain briefly on a draining rack. Grasp the corn dog firmly with the towel and push in a Popsicle stick for a handle. (Leaving the handles off until the cooking is over makes for a lot more room in the pan. Besides, there's no other way to keep the handle from getting greasy).