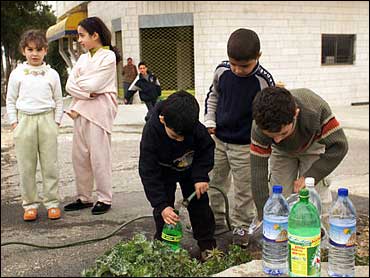 Ayelet Dekel was a student when she started her film 13 years ago.

"I always heard the word refugee camps, I never understood what the terms are," she said.

CBS News Anchor Dan Rather reports she started filming the Palestinian children in Dahaisha refugee camp when they were in kindergarten in 1987, the year of the first Intifada.

Dekel followed the children through their teens.

"They see their mother and fathers humiliated this is a sad reality. The film shows what makes them hate us so much," she explained.

The Israeli filmmaker followed four of the children she met into the second Intifada. The girl Ruba is now a young mother, Hader is a college student. Tarek is so despondent about the future he is planning to leave and go to Switzerland.

"If you follow the desperation and conditions these kids are being raised in refugee camps you see why they are happy to kill themselves," said Dekel.

Ayelet Dekel says Israeli television stations have refused to show her film, saying it is irrelevant to explore how Palestinian kids feel. The film came out six months ago and it is a harsh reality for Israelis to deal with, but the director feels it leaves a sense of hope that, at least, there is someone to talk to.