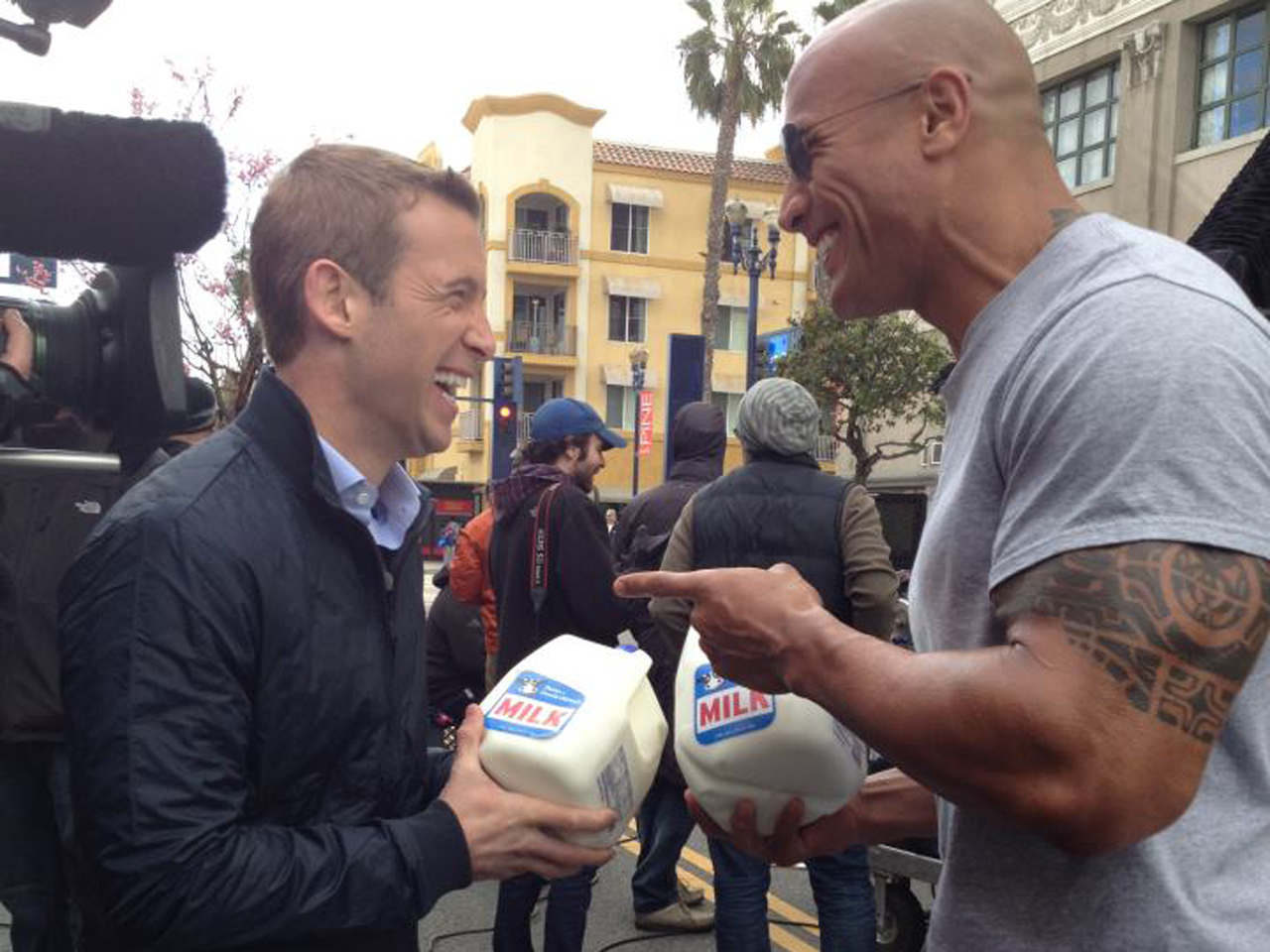 (CBS News) For the first time, the "Got Milk?" campaign is coming to the Super Bowl -- with some "The Rock" muscle.

CBS News recently got a behind-the-scenes look at the making of a mini-blockbuster, which looks like a scene from a major Hollywood movie: big-time action star, big-budget set, and even big scary circus animals.

But it isn't a two-hour big-screen action adventure film -- it's a 30-second commercial for milk.

The milk folks let us on the set in Long Beach, Calif., as they filmed their top-secret Super Bowl ad. This is also the first commercial Dwayne Johnson, also known as "The Rock," has ever done. Johnson is a tough guy who looks like he knows his way around a glass of milk. That's why he's selling the idea that milk protein is the best way to start the day. The audience: an estimated 110 million people watching the Super Bowl on Sunday.

Johnson told CBS News, "If you're gonna do a commercial, you may as well go big. You may as well have impact, just jump in, head first, right into the fire."

Over the past 17 years, the milk mustache has become iconic. Yet this is the first time "Got Milk?" has got a Super Bowl ad. Milk won't say how much it's spending to create its ad, but just to air a 30-second commercial during the Super Bowl costs about $3.8 million. An average of 60 ads are expected to run during the game, all hoping to avoid being named losers the next day.

Film and TV director Peter Berg is calling the shots on the Milk set. He told CBS there's more pressure shooting a Super Bowl ad over a regular TV ad. He said, "I think that we're both (he and Johnson) -- for the most part -- the kind of people that put undue and intense pressure on ourselves for everything."

They spent an entire month creating an animated version of the spot to guide the shoot. After three days of filming in Long Beach, the creative team headed back to New York. They had just three weeks to create the special effects that would have been too expensive to film on location.

Dinoto said, "We are inventing animals that didn't exist. We are creating explosions that were nowhere in sight. And we're putting the finishing touches on what we hope will be a great spot."

It was hard to tell what the spot was actually about while watching on the set. Johnson explained, "So here's the secret, I know the cameras aren't on. Without giving the commercial away, we're talking about worldwide destruction. What's going to happen in the midst of worldwide destruction? This is a massive action film all rolled up in an amazing Super Bowl commercial."

And they let us show you a sneak preview of their big ad. Watch it now, and in Ben Tracy's full report above.

Watch the extended 90-second version of the ad.

Of course these folks are pushing a product and would not let us leave without taking something with us: milk.

Johnson said when he gifted the beverage, "Remember something. It does the body good."

Asked if it's skim or two-percent, Johnson said, "Don't you worry about what it is. You just drink it."