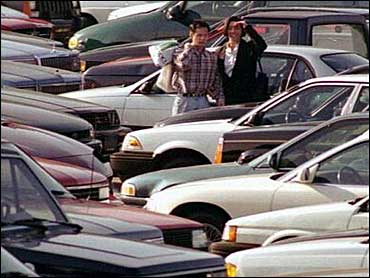 Is your car safe when you opt for valet parking?

An "Early Show" investigation finds you may be taken for a ride by such services. Actually - your car might - for a long ride.

Consumer correspondent Susan Koeppen says you could be wrong if you think your car will stay put if you park it with a valet.

Malls, hotels, restaurants, hospitals and many other facilities have valet parking, but what really happens to your car when you hand over the keys to someone else? You hope it's kept in a nice, safe spot - but "The Early Show" talked to several valets who say it's common for valets to take joy rides -- and put the pedal to the metal.

Mimi and Ulrich Gunthart, of the northern New York City suburb of Briarcliff Manor, learned that recently. When they went away on vacation, they parked their car with a valet service near John F. Kennedy Internatinoal Airport.

Before they wrote down the mileage the odometer showed. "It was like kind of a game," Mimi said.

They had seen a news report that parking attendants sometimes go rogue.

What could have gone on with their car? "Your fantasy can run wild, I have no clue," Mimi remarked.

Former valet Philipe Almeda told CBS News he and his co-workers would go for spins in other peoples' cars almost every night. "We'd see everything from Porsches to Ferraris. … Generally, all those upscale cars. … Depending on how busy it was and what car it was, there was definitely a lot of joy riding going on."

A video shot by a parking attendant and posted on YouTube shows disregard for customers' cars isn't out of the ordinary, Koeppen says.

But joy-riding is one thing -- crashing cars is another. Koeppen showed a car that was totaled at a casino in St. Louis when a valet smashed into a pillar.

The Guntharts say no damage was done to their car, but the next time they go on vacation, they're not leaving it anywhere! "We'll drive the car," Ulrich laughed.

The company that owns the lot where the Guntharts parked their car says it's looking into their claim that someone took it for a joy ride.

Koeppen says there are some things you can do to lower the odds that a valet will use your car while you're gone: Mark down the mileage when you park and make sure the parking attendant knows you're marking it down. Try to be vague about how long you'll be gone. And give a tip when you drop off the keys - and make clear there'll be another one coming when you return to pick up the car - if it's been properly handled.