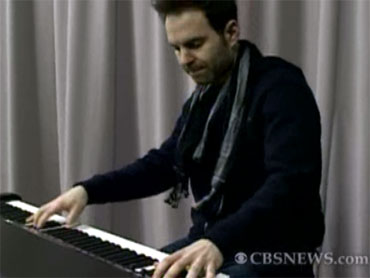 Although now based in New York City, singer-songwriter Josh Charles, an artist with a panache for fusing diverse musical styles from piano jazz to soul, has his heart set in New Orleans, a city where he gained firsthand experience from his main mentor there, prolific blues rock artist Dr. John.

"This record is what I call 'No-Town' music," Charles explains, "My parents are from Detroit, so I grew up with Motown music in my house … Smoky Robinson, Marvin Gaye, The Four Tops … and I also love New Orleans music as a piano player. [The songs on "Love, Work, and Money"] all sort of came together in my style, which I call No-Town … New Orleans meets Motown."

His conception of "No-Town" has certainly drawn Charles attention from the music community, performing at last year's South By Southwest Festival, one of the largest and most prominent film and music events in the U.S., held every spring in Austin, Texas. Charles considered himself very fortunate to perform there, which has showcased many popular and cutting-edge acts in the past such as Morrissey and Bloc Party. The venue certainly appeals to the younger listening audiences who Charles hopes will latch on to his unique sound.

"I had such a great time last year. My showcase at the Elephant Room sold out, I loved taking part in SXSW and I'm really looking forward to it this year. It's just a constant series of parties everywhere. You're really tired by the time you leave but it's one of my favorite places to be," the musician said of the festival.

He may enjoy himself while onstage during concerts, but Charles certainly has not forgotten where he gained his sources of inspiration. Aside from his ongoing performances across the nation, the singer-songwriter has maintained a constant link with The Big Easy.

In August of 2005, Charles, wanting to focus on his music, packed up and moved to New Orleans, just a few days before Hurricane Katrina turned the region into a disaster area.

While he was able to evacuate in time, the experience resonated with him. Wanting to help out this community in some way, the musician created a charity single, "Healing Time," available on iTunes, with proceeds donated to the New Orleans restoration effort. Along with the Harlem Boys and Girls Choir, Charles performed "Healing Time" at the Library of Congress in Washington, D.C.

While complex issues constantly present themselves to Americans, Charles hopes his "No-Town" style will help listeners enjoy themselves and at least temporarily forget about their troubles.

"We're all waiting for something. A lot of people are having a hard time. I hope the record stands as a testament as an album for this generation that will last," he said.

Combining Motown with New Orleans, Charles has also been able to combine tragedy with hope for tomorrow.

Josh Charles' album, "Love, Work, & Money" will be available nationwide on February 9th.
For more information, go to www.joshcharlesmusic.com
Josh's album release party will be at the City Winery in New
York City on February 15th. Tickets are available now at www.CityWinery.com