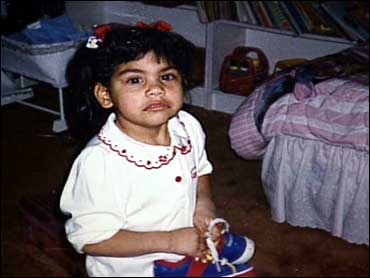 "She bit, she scratched, she almost killed our dog," said Sharon Behrens, who had cared for many foster children. But the little girl named Mia, who had been brutally abused by her parents, was unlike any other, reports CBS News correspondent John Blackstone.

"In a 24-hour period of time, she could scream as much as 12 hours," Behrens said. "When she wasn't screaming, she growled. And it was like an animal."

Mia would scratch and cut herself. She'd spend much of the night crying.

"The level of terror, when the pediatrician saw her, the neurologist saw her, everyone said: 'what in the world happened to this child?'" Behrens said.

According to Thom Snyder, the deputy district attorney of Kings County, Calif., the abuse Mia suffered was ritualistic -- "Satanic in some way," he said.

Snyder knows well what happened to Mia when she was less than a year old.

"She was an infant, but she was grievously sexually abused in ways that I think for the average individual … would be incomprehensible," he said.

According to the U.S. Department of Health and Human Services, 3,300,000 reports of child abuse are made every year in the United States. And more than 80 percent of abused children carry lasting scars as an adult suffering from depression, anxiety, and eating disorders, according to the National Clearinghouse of Child Abuse and Neglect.

Mia's abuse was discovered after her father killed her baby sister. Mia had been abused since she was born.

"She drew biting monsters. She drew naked women lying in pools of blood - the most ghastly pictures you can imagine a three-and-a-half year old drawing," said Dr. Lenore Terr, a child psychiatrist.

Terr says Mia was unable to trust anyone.

"I felt that I couldn't teach her anything else until I could get her to feel safe in the world," Terr said.

Kids like Mia are sometimes called throwaways, too damaged to recover. But Sharon and Bob Behrens didn't throw Mia away - they adopted her.

"I would wake up every morning 'cause I would have been up half the night with her and I would say, 'oh, I'm keeping her 'til noon.' And then I'm calling and she's a goner - I can't do this," said Mia's foster mother Sharon Behrens.

After years of treatment for wounds both mental and physical, there's a different Mia.

"But you're not," said Blackstone.

"Nope!" she said. "I'm walking on earth like every other human."

An important part of Mia's long recovery came when she was just 4 years old and visited the grave of her baby sister Samantha, whose death at her father's hands brought Mia to the attention of child welfare workers.

Blackstone asked whether she made her little sister a promise.

"I told her that I'd see her in heaven someday," Mia said.

"She went to the baby's grave and spoke to the baby. Nobody told her to do this. And she says to the baby, 'You died and I got to live,'" Terr said. "It was an incredible moment in which this child realized that she had gotten to survive for a purpose."

Learn more about the therapy that helped Mia overcome her abuse.

Now Mia has started telling her story of survival publicly to help those considered throwaways. 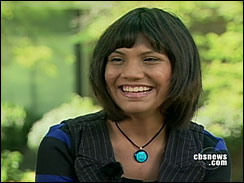 (CBS)
"I am definitely still a work in progress," Mia tells groups.

And she says: "Some people look at those kids, like, 'Oh, they're just gonna grow up to be, like, crazy and in mental hospitals.' That's not true because every kid in the world is important."

She feels free to speak out because her birth father is serving a long prison sentence. She's lost track of her birth mother.

Bob Behrens credits three women for Mia's recovery: wife Sharon for her commitment, Terr for her insights - and Mia for her will to survive.

Those who supported Mia through all the years of struggle got a huge reward last June when she graduated from high school.

"She was a baby when she came," said Sharon Behrens. "And now she's a young woman. You know, with her whole life in front of her. With lots of adventures. And it's been quite a ride."

Snyder, the deputy district attorney, said: "I get paid to use words. I'm at a loss for words to describe Mia - she is that phenomenal."

The girl who once feared everyone is now surrounded by friends. At college, her goal is to become a kindergarten teacher.

"I love children and, you know, taking time and patience and learning about them - they're really interesting," she said.

The girl who once growled and bit can now hardly keep from smiling about her future.