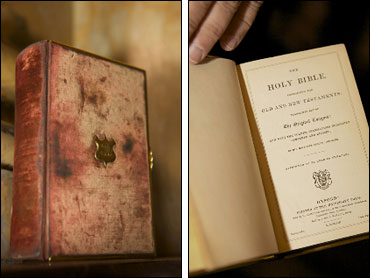 Inspired by Abraham Lincoln, President-elect Barack Obama has invoked the memory of the great emancipator throughout his political life. And tomorrow, he will swear to preserve, protect and defend the constitution on the same bible Lincoln used in 1861, CBS News White House correspondent Bill Plante reports.

They call it the "Lincoln Bible."

"It is in tolerably good condition," said Clark Evans of the Library of Congress.

While it is in good condition, it's not really the Lincoln family bible.

With the Civil War about to erupt and an assassination threat in Baltimore, Lincoln arrived in Washington in the middle of the night.

His belongings and his bible were still en route.

So could it be true that Abraham Lincoln showed up for his first inauguration without a bible, and the chief justice there to swear him in sent him and his clerk to get one?

"That's a very likely scenario for what happened," Evans said, showing the current Lincoln Bible. "And … this is what he brings back."

The clerk of the Supreme Court, William Thomas Carroll, brought back one of the many bibles he kept for official use - then signed and sealed it.

On that day, Lincoln spoke to a nation in crisis, about to split in two.

"As Lincoln said to a nation far more divided than ours," Mr. Obama said.
"We are not enemies, but friends, though passion may have strained it must not break our bonds of affection."

For inspiration tomorrow, Mr. Obama has been reading Lincoln's second inaugural address, shown to CBS News by John Sellers, a Lincoln curator at the Library of Congress.

"Changing words until the end," Sellers said of Lincoln's work. "The final paragraph is one of the most moving things he has ever written. 'With malice towards none with charity for all.'"

In Abraham Lincoln's rise from nothing and in his determination, Barack Obama sees a model - to inspire, to guide and to unite.