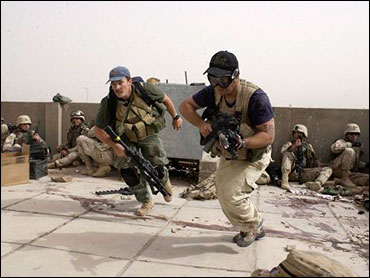 This column was written by Mark Corallo.

I woke up Thursday morning, checked the Blackberry, and found an e-mail from a television-producer friend asking about comments attributed to me by the New York Times about Blackwater USA. Remembering my lengthy conversation with a reporter about the security firm, I expected a thank-you call from my former clients. Then I read the story.

I'm not naïve and I'm no rookie in dealing with the media. But when one spends 40 minutes on the phone with a highly respected reporter, singing the praises of a company that does heroic service to our country, one expects those comments to be reflected in the story.

When the Times's John Broder called me about Blackwater, he wanted to know what I made of the company's recent public-relations push. My response was that it was long overdue: For far too long, the State Department gagged Blackwater, barring them from defending themselves from unfair attacks in the media and by liberal congressman trying to score political points with the MoveOn.org crowd.

I explained that the men of Blackwater were true patriots, heroes who volunteered to go into harm's way to protect the lives of American diplomats and elected officials, some of whom were attacking the very company that kept them safe overseas. Yet because the antiwar Left (most vocally supported by liberal Democrats in the House and Senate) wanted to score political points, they constantly accused Blackwater of being unaccountable and above the law. Nothing, I said, was further from the truth, and these so-called legislators should be ashamed of themselves for being ignorant of the statutes governing the conduct of security contractors overseas.

I went on at length about the vision and commitment of Blackwater's founder and owner Eric Prince. Instead of spending the rest of his life relaxing on the interest from a sizeable inheritance, Prince decided to become a Navy Seal. While serving on active duty he realized that the Navy lacked the facilities to conduct the kind of training that would make our soldiers, sailors, and Marines even more proficient and skilled war fighters. When he left active service, he created Blackwater USA and dedicated his life to making America even safer.

I told Broder stories of bravery from Blackwater employees in Iraq, who suffered injury and death to save the lives of the American civilians in their care. I told him about the standards to which Blackwater holds its employees - standards that exceed those of our armed forces. I told him of their dedication to the rule of law and the Constitution.

I told him of a cable from a State Department employee who literally watched Blackwater heroes die while rescuing her from enemy attack in Baghdad - how she owed her life to them and would never be able to repay them. I then told him that when Blackwater was being dragged before Henry Waxman's oversight committee back in February in a blatant effort to help a civil lawsuit, the State Department would not allow them to even quote from that diplomat's message in order to describe what Blackwater is really about.

I told Broder that our uniformed military are not trained to do personnel security missions - that it would be too costly and a waste of their time and talents. I reminded him that for every soldier deployed forward, it takes eleven support personnel behind them. Blackwater can support 50 security professionals with one support employee back in the States. I told him that for all the talk about the high cost of security contractors, the cost of having our soldiers do the job would be three or four times higher to the taxpayer.

I told Broder that I stopped representing Blackwater for a number of reasons, chief among them my inability to help them under the State Department's gag order. I told him of sitting in a meeting with the State Department's contracting officer, who told the company's representatives that if they so much as popped their heads up in the media, he would ruin them.

I did say that - as would be true of just about any corporation - there were some inside Prince's organization (but not Prince or his senior team) who were unsophisticated in the ways of Washington and didn't understand or particularly like the congressional-oversight process.

I did say that there were a couple of guys who had a "cowboy mentality." But those comments were in the context of the company's image - a necessary one for business purposes. Let's face it, nobody is going to hire a bunch of wimps or trust their lives to guys who aren't willing to act with speed and determination under fire. So the cowboy tag was a double-edged sword.

At the end of my conversation with Mr. Broder, he said that "after this story, the company ought to send you a check." I told him I didn't want money from Blackwater. I was just glad that I could finally tell their story, defend them, take a few hard whacks at the elected officials and bureaucrats who were so ungrateful to these brave men who were protecting them from an enemy that draws no distinction between uniformed military and civilians. I'm pretty sure that Dennis Kucinich would not have appreciated the things I said about his ignorant ranting, his uninformed accusations, his general idiocy.

A million people will tell me that I shouldn't be surprised that the New York Times mischaracterized my comments and omitted 99.9 percent of what I said because it didn't fit the story the Times wanted to tell. They'll tell me that I should have expected it and that I should never have trusted a reporter from the country's leading left-wing newspaper. But I did expect more, and still do.

I'm not holding my breath for a retraction, but I am sorry I ever spoke to the New York Times about Blackwater. Blackwater is a great company that protects Americans in hostile environments. They haven't lost a single one of the Americans in their care, despite suffering over 30 deaths and countless injuries. They are maligned daily for doing exactly what their government has asked them to do, and they do it better than anyone else in the business. And their main client - the U.S. State Department - refuses to tell the real stories of the real people who owe their lives to these heroes.

I'm glad that Blackwater has decided to defend itself, even if it means losing contracts. I'm betting the State Department bureaucrat who threatened to ruin them can't wait to "review" their contracts - another reason why one of the biggest outrages here is the inability to fire incompetent, abusive career civil servants.

So today I'm again left wondering why Eric Prince doesn't just fold up the tents and head to the beach. I know the answer - same reasons why guys who have seen combat over and over go back and face the fire. Those are reasons that the liberals and the media cannot comprehend.
By Mark Corallo
Reprinted with permission from National Review Online