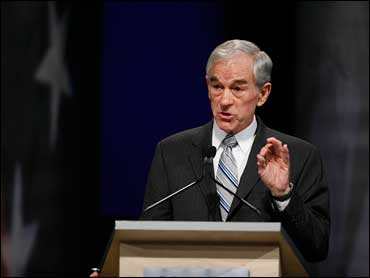 Move over John Kerry, the best single-day primary fundraising record no longer belongs to the prodigious money-collecting machine of the man who won the 2004 nomination.

Ron Paul is now the champ.

Paul collected more than $6 million Sunday. And, unlike Kerry who raised his money from big donors on the day after he won the key primaries that secured him the Democratic nod, Paul is raising his money when it could actually help his quest for the Republican nomination.

Where the senator from Massachusetts was the insider collecting money from donors to rival candidates who now wanted to get on board with his already successful campaign, the congressman from Texas is a classic insurgent who is still dismissed by party leaders and media elites.

And Paul is continuing to raise money - largely small contributions from individuals who in many cases have never before given money to a campaign - at a remarkable rate.

The congressman's campaign is dramatically exceeding fundraising expectations in the current quarter. The campaign's unreasonable goal of $12 million has been exceeded by more than 50 percent already and there is every reason to believe that Paul will almost certainly finish the quarter with more than $20 million raised.

Paul could well end up raising more than any of the other Republican contenders and providing the only serious competition for Democratic money leaders Hillary Clinton and Barack Obama.

But what is really fascinating about Paul's enormous haul of December 16 - in an effort organized by music promoter Trevor Lyman, a Paul enthusiast with no previous political experience - is that it drew 24,940 new donors to the campaign in a single day.
What's the trick?

Lyman, who raised more than $4.3 million for Paul on a single day in November, times his "money bomb" appeals to days that have deep historical resonance for those who fancy themselves insurgents against the current order.

The November appeal came on November 5, the anniversary of attempt by Guy Fawkes to blow up the Houses of Parliament in London.

Sunday's appeal was timed to coincide with the 234th anniversary of the Boston Tea Party.

Paul now has enough money to be a serious presence in the caucuses and primaries through the winter - he's currently tied with John McCain in Iowa and posting credible numbers in New Hampshire - and into the spring.

That means that Lyman may have an opportunity to make an appeal on April 19, the anniversary of "the shot heard round the world" skirmishes at Lexington and Concord that anticipated the American Revolution.

Paul's campaign refers to itself as "The Ron Paul Revolution" and there can be no doubt any longer that it is revolutionizing the way in which grassroots fundraising plays out in American presidential campaigns. Now, the question is whether Paul's crusade can revolutionize the campaign game itself by using the money to upset the political order. Even those who do not share his "Old Right" libertarian views - which tend to be throwbacks to the stay-out-of-trouble abroad and keep-government-small at home positions espoused by Republican Senator Robert Taft in the 1940s and 1950s - can and should be encouraged by the fact that a candidate is breaking the rules and getting a resounding response from grassroots donors.

If Republican primary voters follow - even in reasonable numbers - then Ron Paul's campaign really will be a revolution. And he will be the 2008 candidate who is remembered for doing something that can matter more than winning a party nomination or a November election, and that is changing the politics of a country that needs every new approach to altering a corrupt and dysfunctional status quo.
By John Nichols
Reprinted with permission from the The Nation